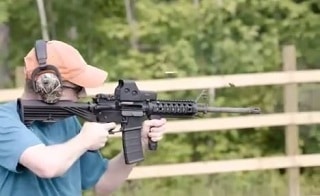 (CNSNews.com) – On June 7, 2010 — about a year and a half into the Barack Obama administration — the Bureau of Alcohol, Tobacco, Firearms and Explosives issued an opinion letter, giving the go-ahead to an after-market accessory that allows the user to “bump fire” a semi-automatic rifle.

A company called Slide Fire had earlier sent its patented replacement shoulder stock to ATF’s Firearms Technology Branch, asking for an evaluation of the device.

The ATF, in reply, wrote: “Your letter advises that the stock (referenced in this reply as a ‘bump stock’) is intended to assist persons whose hands have limited mobility to ‘bump fire’ an AR-15 type rifle.”

The device replaces the factory stock and grip. The replacement stock moves back and forth with the gun’s recoil, allowing it to fire rapidly and continuously as the trigger repeatedly is bumped into the shooter’s finger. A switch allows the user to select semi-automatic fire (one shot for each trigger pull) or the more rapid “bump fire.”

According to the ATF’s June 2010 letter: “The stock has no automatically functioning mechanical parts or springs and performs no automatic mechanical function when installed. In order to use the device, the shooter must apply constant forward pressure with the non-shooting hands and constant rearward pressure with the shooting hand. Accordingly, we find that the ‘bump stock’ is a firearm part and is not regulated as a firearm under the Gun Control Act or the National Firearms Act.”