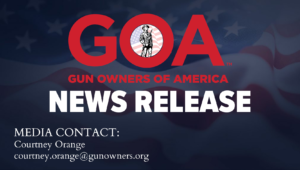 The Biden Administration’s failure to competently draw down American forces in Afghanistan has allowed the Taliban to acquire nearly 600,000 American weapons. But instead of triaging the catastrophe, and bringing Americans – military and civilian – home, the Biden State Department is trying to score political points.

Biden is once again trying to disarm the American people.

Biden unilaterally, and without a vote in Congress, decided to ban the import of all Russian made ammunition into the United States.

In the midst of an international embarrassment and humanitarian crisis of Biden’s own making, the Administration announced it would proceed with so-called ‘increased sanctions’ on the Russian Federation.

But, the proposed sanctions on firearm and ammunition exports affects less than 1% of the Russian economy.

It is clear that sanctioning Russia was never the Administration’s only goal. Rather, Americans are the target of Biden’s latest gun control push.

This administration should be laser focused on fixing the military, humanitarian, and moral disaster it caused in Afghanistan.

Gun Owners of America mourns for the loss of at least thirteen brave Marines who gave their lives in Afghanistan this week.

Gun Owners of America is a grassroots nonprofit which represents more than two million gun owners who are dedicated to protecting the right to keep and bear arms without compromise. For more information, visit GOA’s Press Center.

Joe Biden Arms the Taliban While Banning Ammunition for Americans