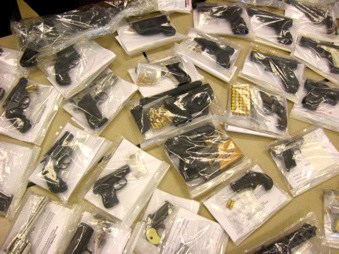 hite House connection to the “Project Gunrunner” that allowed weapons to be delivered to Mexican drug lords, confirmation has come that the program originated at the highest levels of the Obama administration.

The link is the $10 million in taxpayer dollars designated to the Bureau of Alcohol, Tobacco, Firearms and Explosives for Project Gunrunner in Obama’s 2009 American Reinvestment and Recovery Act, otherwise known as the Stimulus Bill.

Section 5, Division A, Title II, under the heading of “Office of Justice Programs,” says the money is set aside for border regions.

For an additional amount for ‘State and Local Law Enforcement Assistance,’ $40,000,000, to remain available until September 30, 2014, for competitive grants to provide assistance and equipment to local law enforcement along the Southern border and in High-Intensity Drug Trafficking Areas to combat criminal narcotics activity stemming from the Southern border, of which $10,000,000 shall be transferred to ‘Bureau of Alcohol, Tobacco, Firearms and Explosives, Salaries and Expenses’ for the ATF Project Gunrunner.

Understand the importance of being able to defend yourself, get “Shooting Back: The Right and Duty of Self Defense”

Gun Owners of America President Larry Pratt believes stimulus money was given to a drug dealer to buy guns.

“Ten million dollars, and one of the ways they were spending it was a paid FBI informant who was a drug dealer they had flipped. So he was buying lots of guns with that stimulus money,” Pratt said.

Pratt said that the stimulus bill enhanced one industry in particular.

“We can say there’s one thing that was stimulated by the stimulus bill and that was the Mexican undertaker business,” Pratt said. “Mexican authorities say that 150 people were murdered using these guns.”

Listen to an interview with Pratt:

Pratt said that the gun buyer involved was the subject of what he calls an “aspect of tragic comedy.”

“This FBI informant was being surveilled by the ATF that was running the Fast and Furious Operation and they had no idea that he was an FBI informant,” Pratt observed.

“But obviously they didn’t need to be informed because they didn’t care. They just wanted the guns to walk,” he stated.

Today, Sen. Chuck Grassley, R-Iowa, said he would support the call for a special prosecutor if members of Congress investigating the issue believe that is the best solution.

Appearing on the Steve Gill show, he said, “The point of our inquiry is to find out who really signed off on this operation. Who is the one who said ‘yeah, this is a good thing to do.’ It might have sounded like a good idea, but it ended up with the murder of Mr. Terry, a border control agent, and two of the guns were found at the scene of that murder.”

A report in the San Francisco Chronicle says that FBI informants were connected to the ATF’s Project Gunrunner.

Firearms law analyst and writer David Codrea believes that even if there is evidence to prove that known criminals used taxpayer money to get guns to take to Mexico, nothing is likely to be done with the evidence.

“If left to Holder’s Justice Department, nothing, because it shows this had to be top-level DoJ-authorized,” Codrea explained.

Reports say other federal agencies have also been drawn into the operation. The DEA, FBI and upper-level DOJ officers, including the U. S. Attorney’s office in Phoenix, have been named.

Attorney General Holder’s office has not responded to WND’s request for comment.

Codrea believes that it’s possible that ATF Acting Director Kenneth Melson’s office was bypassed in decision-making about the operation.

“It’s absolutely possible and may even be probable that they bypassed Melson in the operation. However, that does not excuse him from having no control of his agency,” Codrea said.

Pratt also believes that some of the guns were purchased by the Mexican cartels directly from federal agents.

“One of the founders of the cartel, one of their top 14 directors if you will, a guy whose nickname is El Mamito, has said that he was buying guns directly from the federal government,” Pratt explained.

Pratt said he believes for the guns to go across at a designated location, there had to be coordination between several federal law enforcement agencies.

“There had to be some kind of a deal with the Border Patrol. … We know that in that ’09 meeting that set-up Fast and Furious, those four or five agencies were all part of the deal,” Pratt said.

Pratt said that it’s not likely that many of the representatives who voted for the stimulus package were aware that money was allocated for Project Gunrunner.

“Anyone who voted for the stimulus bill has another reason to regret their vote. Obviously they didn’t read the bill,” Pratt asserted. “They don’t read most of the bills up there at all.”

Pratt illustrated his comment by citing former Speaker Nancy Pelosi’s comment about the health care bill: “But we have to pass the bill so that you can find out what is in it, away from the fog of controversy.”

Several border state representatives contacted about the stimulus package and its allocation of $10 million for Project Gunrunner have not returned WND’s calls.

Pratt also said that he’s supportive of West’s call for the removal of Holder and for a special prosecutor to be appointed.

“This is something that is very appropriate. While Rep. Issa was very correct in his choice of words, he said he didn’t think Attorney General Eric Holder told the truth,” Pratt said. “He could have said it more sharply, that he thinks Eric Holder is a liar, but it comes out the same in the wash.”

Codrea believes that the pressure felt by the administration may be the leverage needed for the Justice Department or the White House to force Melson to resign.

“I think they were hoping they could have him quietly transferred out but he saw what was going on and he has to understand which way the wind blows and he has things on higher ups and they want him to keep quiet,” Codrea commented.

Listen in an interview with Codrea:

Codrea and Pratt believe that the issue is going to get bigger as more details become public. Pratt believes that if Issa’s committee continues its work, the entire scenario may rise to the level of Watergate.

“Just like Watergate became the only thing the Richard Nixon administration could think about, I think ‘Fast and Furious’ is coming to the point where it’s going to be an all consuming issue,” Pratt said.

“It’s going to take the Obama regime off their stride and they’re going to have to be playing defense.”

The UN is After Your Guns