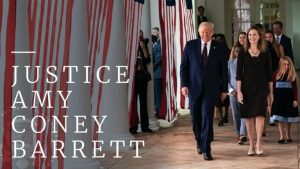 That’s why the Democrats and their media cheerleaders have been complaining to their followers that the confirmation vote should have been put off until after the election so that if Joe Biden wins, he’d get to nominate the replacement for Ruth Bader Ginsberg. That such a requirement appears nowhere in the Constitution hardly matters to them. Were delegated powers with checks and balances important to them, they would revere the ultimate check and balance on government abuses of all, the right of the people to keep and bear arms as mandated by the Second Amendment….

With Barrett, the expectation is that her philosophy will be similar to that of the man she once clerked for, the late Justice Antonin Scalia. As such, her nomination was applauded by the three major national gun owner rights groups.

“From a Second Amendment perspective, Judge Amy Coney Barrett appears to be a strong choice,” Gun Owners of America assessed.  “She has indicated a willingness to examine and apply the Second Amendment as written, by looking at its text and using history as a guide, instead of engaging in the judge-empowering interest balancing that has run rampant in the lower courts.  Gun owners will relish seeing a new addition to the Supreme Court who is ready to hold lower courts accountable for failing to uphold the Constitution and for refusing to follow the Heller and McDonald precedents.”…