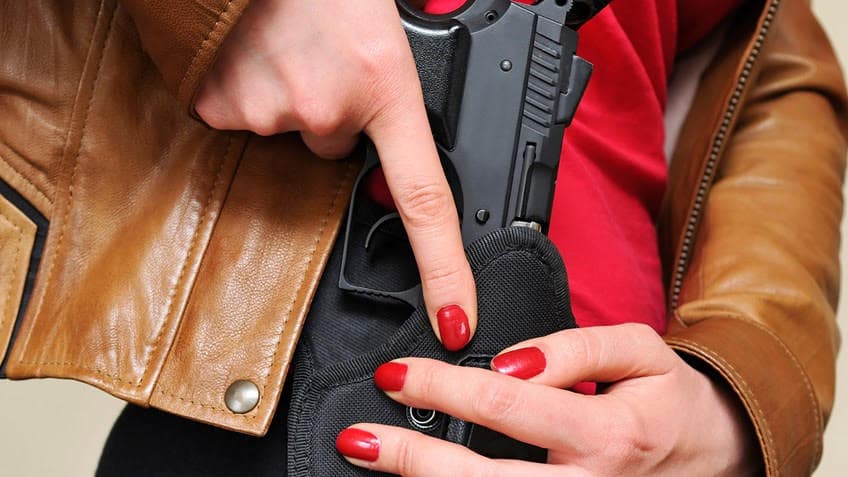 But there are some who are not convinced that H.R. 38 is beneficial.  Here are answers to the most common arguments.

Objection: Reciprocity legislation will become a vehicle for anti-gun amendments.

And they will not lack the ingenuity and the will to do the same again, whenever they are capable of doing so.

The fact that we cripple ourselves by refusing to protect Second Amendment rights will be completely irrelevant to their ability or will to attempt restricting them.

On the other hand, demoralizing the anti-gunners by achieving a victory on the Hudson bill will damage the ability of the anti-gun Left to move against us in the future.

By the way, we at Gun Owners of America have shown in the past that we can get legislation passed without weakening amendments being tacked on by the Schumers in Congress.

For instance, GOA worked with Sen. Tom Coburn (R-OK) to draft and enact a repeal of the National Parks gun ban.  His legislation passed unamended in 2009 — even though Democrats were in control of the Senate and Obama was the executive in the White House.

Finally, please note that passing reciprocity legislation is constitutional because of Art. IV (Sec. 1) and 14th Amendment (Sec. 5). (See the next point for more details.)

Objection: Federal reciprocity is the antithesis to federalism.

The powers not delegated to the United States by the Constitution, nor prohibited by it to the States, are reserved to the States respectively, or to the people.

Having said that, the Tenth Amendment notes that some powers have been “prohibited” to the states (many of these can be found in Article I, Section 10). And while some powers are prohibited, there are other areas where the states can be limited.

Two such examples are found in the Full Faith & Credit provision of Article IV, Section 1 and the 14th Amendment — the latter which was featured in McDonald v. Chicago (2010).

Justice Samuel Alito, one of the most pro-gun judges to ever sit on the Supreme Court, authored the decision in McDonald — arguing that the 14th Amendment incorporates the Second Amendment, thus preventing states from infringing the right to keep and bear arms of citizens.

The 14th Amendment authorizes Congress to pass legislation to protect people’s rights (in the first eight amendments) from state abuse. In fact, the sponsors of the 14th Amendment both agreed that this language would prohibit states from infringing upon people’s right to keep and bear arms. (See the statements from Ohio Rep. John Bingham and Michigan Sen. Jacob Howard, as cited in McDonald.)

The enforcement mechanism in the 14th Amendment is found in Section 5, which says: “The Congress shall have power to enforce, by appropriate legislation, the provisions of this article.”

We live in a day when several anti-gun states are not only severely restricting the Second Amendment rights of their own citizens, they’re doing the same to citizens from other states:

• Maryland police have pulled over out-of-state drivers to search for weapons, in violation of the Firearm Owners Protection Act of 1986.

• In an attempt to drive gun makers out of business, several anti-gun officials brought dozens of lawsuits against out-of-state gun manufacturers after their weapons had been used in crime. The reckless lawsuits would have ruined the gun industry had Congress not interposed itself and enacted the Protection of Lawful Commerce in Arms Act in 2005.

• For years, several anti-gun states have blocked out-of-state citizens from exercising their right to keep and bear arms when traveling within their states. This has even resulted in the death of a lawful concealed carry holder, a military veteran, who was prevented from carrying in a neighboring state where he was rendered defenseless in the face of a mass shooter.

A handful of anti-gun states are trying to drive a stake through the Second Amendment and deny gun rights to individuals ALL ACROSS THE COUNTRY.

But thanks to 2nd and 14th Amendments — and the Full Faith and Credit provision in the Constitution (1) — Congress has the power to do something about this.

If there is one power the government definitely has, it is to ensure that the Constitution — and the God-given powers it embodies — are effectual.

And those Second Amendment advocates who claim that states can abrogate the right to keep and bear arms — both with respect to their own residents and with respect to the residents of other states — have an obligation to explain why they are not reading the Second and Fourteenth Amendments into irrelevancy.

If the Obama-packed anti-gun courts refuse to enforce the McDonald decision and respect the Second Amendment, it is the responsibility of Congress to do so.

Objection:  The Second Amendment is the only permit we need.

Answer:  It is true that the Second Amendment should invalidate EVERY single gun control law that penalizes honest citizens.

The problem is that if you try to use the Second Amendment as your “permit” to carry in most states, you’ll be arguing your case in jail.

And that’s why GOA so strongly supports Constitutional Carry laws — such as those which now exist in twelve states.

Law-abiding citizens in these states are now carrying their firearms concealed WITHOUT PERMITS AND WITHOUT ANY FEAR of going to jail.

So herein lies the lesson:  Good laws make a difference!

Therefore, we should not shrink back from attempting to enact good laws that will further safeguard people’s rights.

No more should people like Shaneen Allen have to fear arrest and incarceration, simply because their concealed carry permits are not recognized in a neighboring state.

That’s why H.R. 38 is so important.  It will guarantee your right — if you live in a Constitutional Carry state — to freely carry firearms as protected by the Second Amendment.

But H.R. 38 will not create a national carry permit!  (See the answer to the objection below.)

Furthermore, H.R. 38 specifically does NOT give the federal government control over people’s right to carry in any way, shape or form — it only grants reciprocity amongst the states.

In fact, there is NOTHING in any bill that Gun Owners of America has ever supported that would come close to creating a national concealed carry permit.

GOA would never support such a bill. Not only is that a state prerogative, giving the federal government the power to issue a national permit would grant a future Obama-styled administration the power to regulate it into obscurity.

Gun Owners of America even OPPOSED reciprocity legislation in the past — H.R. 197 by Rep. Cliff Stearns in 2009 — which would have imposed “national standards” concerning where you could or couldn’t carry a firearm, even with a concealed carry permit.

After pressure from GOA and its activists, those “national standards” were sent to the junkyard and excluded from future reciprocity bills.

Now, some might argue that H.R. 38 will be hijacked and turned into a national carry permit.  But in saying this, they have just conceded that H.R. 38 does NOT create a national permit.

It is incumbent on those who claim that H.R. 38 would allow for a national permit to specifically show what language in the bill would do this.

But gun owners should not think that retreating to the sidelines and sitting on our collective hands is going to make the Chuck Schumers in Congress go away — or that it will prevent them from offering anti-gun legislation.

If Congress wanted to pass a national concealed carry permit — over GOA’s objections — they wouldn’t need to amend H.R. 38.   They could attempt it with any other bill.

As stated above, the fact that we cripple ourselves by refusing to protect Second Amendment rights will be completely irrelevant to their attempting to restrict those rights.

(See also the above objection answered: “Reciprocity legislation will become a vehicle for anti-gun amendments.”)

Answer: Gun owners who live in anti-gun states — like California, Illinois, New Jersey, New York, etc. — want to know if H.R. 38 will benefit them in any way.

In short, the answer is “Yes.”

The reason is that reciprocity is granted to any law-abiding gun owner who lives in a Constitutional Carry state OR who possesses a concealed carry permit from ANY state.

So for those of you who live in “occupied” states, you would benefit from H.R. 38 if you fulfill three requirements:

(1) You are not barred by federal law,

Note the operative word “a” in point #3.  This grammatical construction means that if you have a permit/license from ANY state, not just your state of residence, you benefit from the reciprocity provisions in the bill.

This is important because it means you could get a Florida or Utah permit to enjoy reciprocity — anywhere around the country, and even in your own home state.

(1) In addition to the 2nd and 14th Amendments, some have also pointed to the Full Faith and Credit provision in Article IV, Section 1 of the Constitution as justification for Congress to enact concealed carry reciprocity laws.  This provision expressly authorizes the Congress to pass legislation requiring each state to recognize the “public Acts” of other states. Thus, if states are not willing to recognize another state’s acts — such as their laws authorizing people to carry concealed — then Congress has the authority to pass laws to require recognition of another state’s measures.

Writing in The Washington Post, Will Baude says, “The Full Faith and Credit Clause empowers Congress to ‘prescribe * * * the Effect’ of state acts, records, or judicial proceedings in other states. U.S. Const. art. IV, § 1. For instance, the Full Faith and Credit for Child Support Orders Act requires certain state child support laws to be given their full effect in every other state. See 28 U.S.C. § 1738B(h). Similarly, the Parental Kidnaping Prevention Act requires every state to recognize certain child custody judgments from other states, and it forbids them from exercising their ordinary jurisdiction over such disputes. See 28 U.S.C. § 1738A.”