The Battle Isn’t Over Yet

Yesterday’s News Was Great, But the Battle is Not Over Yet 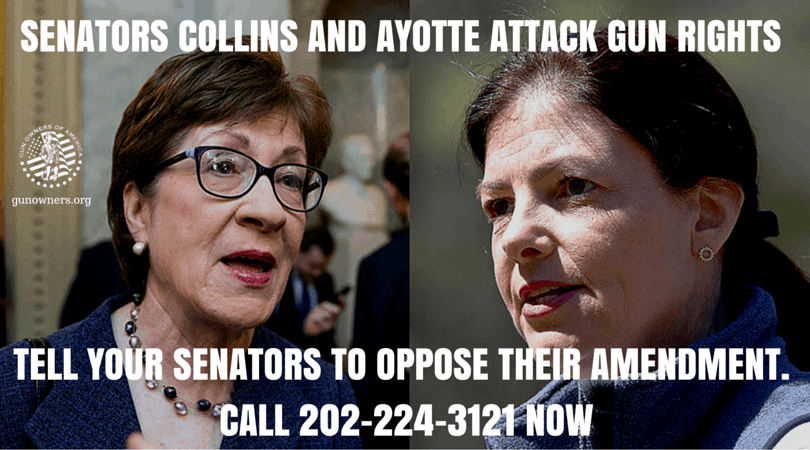 Take a Moment to Celebrate, But There is Still More Work to be Done

GOA wants to thank our entire grassroots army for taking action over the past several days.

Because of your assistance, every single gun control amendment failed last night.

However, we are still facing threats from at least one more amendment.

Tell them to vote NO on all gun control today — including the Collins-Ayotte amendment, which we will detail below.

Thankfully, the most egregious measures were defeated last night.  One was a Feinstein amendment that would have allowed the Attorney General to keep law-abiding gun owners from buying a gun.

These denials would not have been based on a criminal conviction, but would result from a bureaucrat placing a person, even erroneously, onto a government watch list.

Then, there was a Murphy amendment that would have imposed Universal Background Checks — aka, gun owner registration — on every private purchase of a firearm.

Both of these amendments failed handily — as did the Republican, gun control “lite” alternatives.

The Battle is Not Over Yet

There are more amendments that could still come to the Senate floor.  One such amendment could be an anti-gun Collins-Ayotte amendment.

In press reports, Ayotte has bragged that her amendment would “only” apply to 2,500 individuals on the “No Fly” and the “selectee” lists.

But there are many problems with her language:

1. There is no statutory limit to the number of people who could be placed on lists based on “credible” secret evidence.

So in theory, every member of Gun Owners of America and every member of the National Rifle Association could be placed on those lists, based on the New York Times’ assessment that we are “complicit in terrorism.”

2. Collins-Ayotte claims to provide due process to people illegitimately denied firearms, but you will need to be wealthy enough to pay for your own attorney.

As GOA’s chief Legislative Counsel explained in a memo to the Senate today:

We’ve gone through this exercise before with the so-called “right to review” in the NICS Amendments Improvement Act of 2007. In that statute, disarmed veterans supposedly had a “right of review” comparable to the Collins amendment.

Collins has created “due process,” at best, for “the 1%.”… After the fact, the court “shall” award attorneys’ fees to the prevailing party — including the government. [But over the years, provisions like this have] had little impact for non-wealthy litigants forced to pay the costs of litigation up-front and faced with, at best, a slight chance of reimbursement at the end of the process.

There may be other amendments put forward as well.  So Gun Owners of America will keep you updated as news becomes available.

But for now, please call your Senators at (202) 224-3121 — and tell them to vote NO on all gun control, including the Collins-Ayotte amendment.

This proposal could come up today or tomorrow.  But because the time frame is so short, emails would be ineffective.  So making phone calls is our only avenue right now.

Thanks so much for your efforts.

Home Invader Poops Himself, Hides Behind Door After Being Shot by Armed Woman