Will Idaho Become the Next Constitutional Carry State?

Click on the Take Action button and urge your state senator to vote for Senate Bill 1389, a bill that will protect your right to carry a gun without registering yourself with the government or paying a permission fee.

A good Constitutional Carry bill has been introduced in the state senate, and the State Affairs Committee will be holding a hearing it this Monday, March 14 (at 8 am). 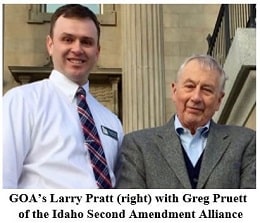 Gun Owners of America encourages you to voice your support for Senate Bill 1389 and attend a hearing in support of this bill on Monday at the Lincoln Auditorium in the Boise Capitol.  NOTE:  The auditorium is on the Garden Level (bottom floor) on the West Wing (Senate Side).

Under SB 1389, you will be able to carry a concealed gun without registering yourself with the government or paying a permission fee.  SB 1389 enables this without taking away the rights of 18-20 year olds to carry outside of urban areas (as other permitless carry bills would do).

SB 1389 has the support of Gun Owners of America, the Idaho Second Amendment Alliance, and the Idaho Sheriffs Association.

Go here to tell your state senator to vote for Senate Bill 1389.

And make sure you attend the hearing on Monday (March 14 at 8 am) at the Lincoln Auditorium in the Boise Capitol — on the Garden Level (bottom floor) on the West Wing (Senate Side).  Go here for more information about the hearing.

Woman Scares off Assailant With Stick. Just Kidding, it was a gun.