Urge your Senators to support the Paul proposal — an amendment that will gut the anti-gun aspects of ObamaCare.

Not a GOA member yet?  Double your dollars, at no extra cost to you, when you join or contribute to Gun Owners of America today!

Republican Senator Rand Paul (KY) is gearing up for one last chance at repealing a pernicious gun control law.

And he needs our help. 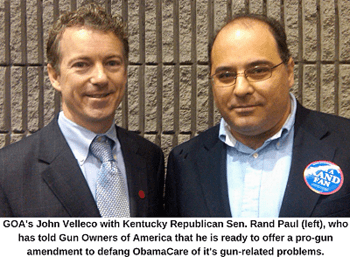 I’m talking about the anti-gun provisions of ObamaCare, which Democrats rammed through in 2010.

Senator Rand Paul’s office has told me that he is committed to offering an amendment that will strike the anti-gun aspects of ObamaCare, once and for all.

There’s not much time left to do this.

Congress has roughly two weeks to repeal ObamaCare before the “reconciliation” period expires.  When that happens, the repeal will require 60 votes, and ObamaCare repeal will probably be beyond our reach.

To recap, ObamaCare is a “gun issue” because Obama, in his 23 “executive actions,” pushed for doctors to ask about guns in the home and record this information in ObamaCare’s registry.

The ATF could also troll this registry to identify people with PTSD and other ailments (ADHD, Alzheimer’s, etc.) so that their guns could be taken away — making guns-as-an-inheritance a thing of the past.

So, yes, we at GOA want ObamaCare to go away.

And this would have been doable if GOP Senators John McCain (AZ), Lisa Murkowski (AK), and Sue Collins (ME) had not decided that saving ObamaCare trumped their campaign promises to sunset it (no pun intended).

It appears now that “the last train leaving the station” will be a vote on the Cassidy-Graham proposal to repeal large portions of ObamaCare.

Surprisingly, the Cassidy-Graham text is probably a better amendment than the one that was rejected by the Senate in July.

It would take a major portion of ObamaCare’s federal requirements and vest them in the states.  Most of the money would be block granted.

In addition, it would repeal the individual and corporate mandates to buy sucky politically-correct insurance.

Also, surprisingly, the sponsors believe the Cassidy-Graham amendment has 48-49 votes — meaning that it is on the very verge of passage.

For his part, Senator Paul is introducing an amendment which would guarantee Second Amendment rights under any version of healthcare that replaces ObamaCare.

The Paul amendment would:

* Prohibit the ATF from trolling the ObamaCare database in order to ban guns for people with medical conditions such as PTSD — a diagnosis which has contributed to more than 257,000 military veterans being denied their gun rights;

* Prohibit insurance companies from asking about or discriminating on the basis of gun ownership; and,

* Prohibit the states from forcing doctors to enter gun ownership information into the federal health database.

Like Dracula, this ghoulish law has been sucking the life out of hardworking Americans, forcing them to pay for the anti-gun Left’s political agenda.

So please contact your Senators and urge them to support the Paul amendment.

Let’s drive a stake through the heart of this ObamaCare vampire once and for all.

P.S.  Please urge your Senators to support the Paul Amendment.  And remember that every dollar you contribute to help keep GOA on the frontlines — up to $100,000 — will be doubled, thanks to the generosity of GOA Life Member!

What Do Mass Shooters Have in Common? (Hint: It’s Not Gun Type or Religion)