GOA Once Again Enters the Fray in Important Court Case

“The DC registration law [is] in violation of the Second Amendment [and] undermines the primary purposes of the right to keep and bear arms — to resist tyranny and to defend self, family and property.” — GOA amicus brief in Heller III

Gun Owners of America submitted a vital amicus brief in Heller v. DC on Tuesday — in a case that is otherwise known as Heller III.

This case has national implications, as the courts continue to chip away at the Second Amendment and the DC v. Heller decision from 2008.

Gun owners remember that year well, as it marked the historic ruling by the U.S. Supreme Court which struck down the draconian gun ban in Washington, DC. The Court correctly noted that the right to keep and bear arms is one that “belongs to all Americans,” and is a right that “shall not be infringed” or denied, thus allowing citizens to better “resist tyranny.”

GOA was involved in the original Heller case — in what is now known as Heller I. 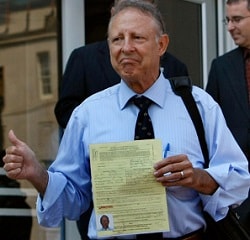 After DC lost this decision, the city council crafted registration and licensing regulations so onerous as to technically permit possession of handguns in the home, but in effect making it so difficult and expensive that many people found it impossible to legally acquire a firearm.  The District also banned so-called “high capacity magazines” and so-called “assault weapons.”

When Dick Heller, the plaintiff from Heller I, brought suit to challenge these new restrictions in 2010, GOA again came to his defense in what is known as Heller II.

But given the anti-gun animus of DC’s District Court, it was not surprising when the judge completely disregarded the Supreme Court’s decision in Heller I, and used a “balancing test” to pit gun owners’ rights against the need for public safety.

Never mind that the Second Amendment completely nullifies such balancing tests, saying that the right to keep and bear arms “shall not be infringed.”

And never mind that all legitimate studies — both private and government — show that guns actually make people safer!

Not only that, the judge gave maximum weight and full credence to every bit of evidence put on by DC’s anti-gun lawyers.

So this is where we now stand.  Based on that subjective “balancing” of hearsay evidence, it is no wonder the district court judge found every one of DC’s registration regulations to be constitutional.

GOA’s amicus brief (in Heller III) reminds the DC Circuit Court of Appeals of the first principles articulated in Heller I that DC judges have consistently abandoned, and we take the District Court’s opinion to task for permitting sociology and statistics to trump constitutional rights.

Again, this case is important for gun owners around the country, as GOA works to ensure the courts are upholding the proper understanding of the Second Amendment.

You can help GOA in bringing this suit by contributing here.

GOA is celebrating Constitution Day this year by giving away two M&P Shield firearms.  This is a great “his and hers” set — consisting of 9MM and .40 caliber handguns, courtesy of Smith & Wesson!

Enter here to win these two guns.  Contest ends at midnight on September 17.

WHY I CARRY: Seven People Attack Pair of Brothers with Machetes in Chicago