What if Barack Obama could create 5,000,000 new anti-gun voters … in a tyrannical act of unconstitutional usurpation … all by the stroke of his pen?

And what if Obama justified his tyranny by acknowledging, effectively, that he controlled the police and that there was nothing anyone could do about it? 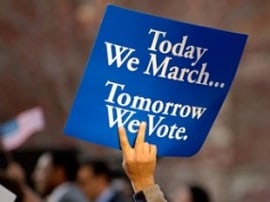 Would that alarm you?

Well, that is apparently what is about to happen, as Barack Obama moves to illegally legalize 5,000,000 people unlawfully in the United States. And don’t be fooled into thinking the 5 million work permits are not a superhighway to the 5 million-plus new anti-gun voters that Obama craves.

The Congressional Hispanic Caucus gave Obama a “wish list of executive actions and urged Obama to legalize all of the illegal immigrants that would have qualified under the Senate’s amnesty bill.”

A Pew poll from last year indicated that if illegal immigrants were eventually given citizenship, they would vote for liberal, anti-gun candidates by an 8-to-1 margin.

This is why Senator Jeff Sessions (R-AL) is calling on all Americans to melt down the Senate phone lines and demand that they oppose the President’s planned executive amnesty.  According to one media report:

“Recent developments suggest the President’s planned executive amnesty could be increasingly imminent and broad in scope,” Sessions said, citing how Pelosi has called on the President to give the “broadest possible” executive amnesty to perhaps as many as ten million illegal aliens. (Breitbart.com, Aug. 12, 2014)

We’ve seen this game before:  As recently as 1980’s, California was represented by a conservative Republican:  S.I. Hayakawa.

Incidentally, the fact that the chief sponsor of the 1986 Simpson-Mazzoli Amnesty — and the President who signed the bill into law — were both Republicans made no difference in swaying the newly legalized voters from supporting liberal, anti-gun candidates.

We cannot afford to have California’s de-gun-ization extended to the whole country.  And we can even less afford for that to happen by a tyrannical seizure of power which even liberals concede is illegal and unconstitutional.

So the question is this:  With control of the Senate up for grabs, how many senators support Obama’s tyrannical power-grab — a power-grab that could set the Second Amendment on the course of total destruction?

“The American people have the power to stop [this],” Sessions said.  “That begins with asking a simple question: where do your Senators stand?”

ACTION: Senator Harry Reid is blocking a vote on the House-passed anti-amnesty measure in the Senate.  So contact your Senators.  Ask them whether they support Obama’s anti-gun immigration power-grab.  And, if not, ask him if he would support a move to force the issue onto the Senate floor.