Alabama shouldn’t elect someone who is bought and paid for by the D.C. establishment.

You can stop that.

Alabama Republicans will head to the polls on August 15 to pick a nominee for United States Senate.

The winner of that race will complete the term of departed Senator Jeff Sessions, who left the Senate to become Attorney General.

Now-resigned Governor Robert Bentley appointed Luther Strange to serve in the seat until a permanent replacement is elected.

The good news is that gun owners have two very pro-gun choices. 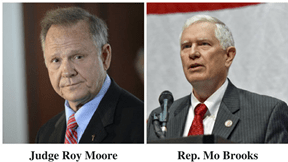 That is why Gun Owners of America is proud to recommend a vote for either Congressman Mo Brooks or former Alabama Supreme Court Chief Judge Roy Moore in the August 15 Republican primary for U.S. Senate.

Mo Brooks has always been there to sponsor, co-sponsor and vote for pro-gun legislation.

He’s also been a leader in the fight to defeat other threats to gun owners, such as the anti-gun United Nations.

Even better, when GOA members need someone to stand up to spineless Republican leaders, Mo Brooks answers the call.

Mo Brooks has an “A” rating from GOA as U.S. Representative, and you can bet he’ll be a loyal friend as a U.S. Senator.

Judge Moore has been on the front lines, fighting our enemies, for decades.

GOA is a friend to Roy Moore, and Roy Moore has been a friend to GOA members, for decades. While others fled, GOA was proud to stand along Judge Moore as he was persecuted for standing up for America’s founding principles. There are few men I trust more than Judge Moore.

Judge Moore has long been an articulate, and uncompromising, champion for gun rights.

Judge Moore will fight just as hard for gun owners in the U.S. Senate.

I wish I could say the same for appointed Senator Luther Strange.

Unfortunately he has pledged his loyalty to Senate leaders, who are now spending millions in Beltway cash to keep him in the seat.

Mitch McConnell just ordered $2.4 million in ads backing Strange — and that’s just a fraction of what D.C. says they plan to spend telling you what to do.

Luther Strange was not even elected to the Senate by the voters of Alabama to this seat.

And it’s not up to Mitch McConnell and the Washington establishment to select the next Senator (blowing millions of dollars of Republican donors in the process!)

Believe me, anyone who is elected by party insiders will demand loyalty to them — not to you — in return.

You can correct that by going to the polls Aug. 15 and voting in the Republican primary for U.S. for either Mo Brooks or Roy Moore.

P.S. Gun Owners of America recommends a vote for either Mo Brooks or Roy Moore in the Aug. 15 Republican primary for United States Senate.

Both Brooks and Moore have strong, uncompromising records on your gun rights.

Appointed Senator Luther Strange has quickly become a Swamp Creature, bowing to whatever demands D.C. leaders make of him.

Take action to defend your rights. Volunteer for, donate to, and get out and vote for either Mo Brooks or Roy Moore in the Aug. 15 Republican primary for U.S. Senate.