ACTION: Click here to urge your Representative and Senators to lead the charge against the new Obama gun ban. Urge them to cut all funding for this ban — and to leave our seniors alone!

Millions of seniors could lose their guns, jeopardizing the ability of kids and grandchildren to inherit them

“I didn’t know the VA could take away your guns,” the young Marine said.

The harsh truth is that the Veterans Administration can do that — and they have been for years — to veterans who have committed no crimes whatsoever.

But it’s not just veterans who are on the chopping block. 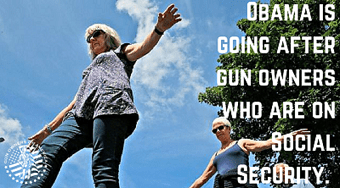 Obama’s latest gun grabbing scheme could be his cruelest and most dangerous to Americans.

The Los Angeles Times reports that the Obama administration is pushing to “ban Social Security beneficiaries from owning guns” if they lack the mental capacity to “manage their own affairs” — a move that could affect millions of senior citizens.

Obama wants to strip gun rights from millions of seniors and vulnerable Americans who pose no threat to anyone, without due process of law.

Even the liberal Times is concerned, warning it denies guns to “numerous people who may just have a bad memory or difficulty balancing a checkbook.”

“Someone can be incapable of managing their funds but not be dangerous, violent or unsafe,” said Dr. Marc Rosen, a Yale psychiatrist who has studied how veterans with mental health problems manage their money. “They are very different determinations.”

Thank you for your service, now hand over your guns!

Steven Overman is a 30-year-old former Marine living in Virginia.

He served his country with distinction in Iraq, where his Humvee hit a roadside bomb in 2007.

The blast resulted in post-traumatic stress disorder and a brain injury that weakened his memory and slowed his cognitive ability. He is 100 percent disabled.

But he poses no threat to anyone. No court or doctor has ever found him to have any violent tendencies or difficulty managing a weapon.

In fact, target shooting is his only solace.

The VA named his wife his fiduciary in 2012, given his difficulty in remembering payments and balancing a checkbook.

And that put him on Obama’s gun ban list.

“I didn’t know the VA could take away your guns,” Overman said.

It’s because federal law bans gun possession for anyone who has been “adjudicated as a mental defective.”

Of course, we’re not talking about real dangerous people. No, we’re talking about individuals who have simply had a fiduciary appointed for them.

Now, Obama wants to take a horrendous idea and apply it to senior citizens. Obama is literally snatching guns from our most vulnerable citizens, without due process of law.

Congress has a duty to stop this, so they need to hear from you right away.

ACTION: Click here to urge your Representative and Senators to lead the charge against this new Obama gun ban. Urge them to cut all funding for the ban in the Social Security appropriation bills in H.R. 3020 and S. 1695.