Once Again, Gun Owners Like You Vanquish Reid and Obama

Earlier today, the “Harry Reid Preservation Act,” S. 2363, went down to defeat, as pro-gun Senators successfully filibustered the bill by a vote of 56-41.

In a last minute letter to Capitol Hill today, Gun Owners of America told Senators that a vote to end the filibuster “will be viewed as a vote AGAINST veterans … AGAINST concealed carry reciprocity … and AGAINST preserving the gun industry.”

GOA also warned Senators that a vote in favor of S. 2363 would be scored in our end-of-year rating. 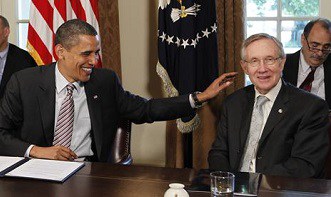 All these Senators are rated as D’s or F’s by Gun Owners of America.

S. 2363 would have allowed hunting on federal lands — unless Barack Obama determined that guns were dangerous. How likely do you think that is?

It would have allowed importation of polar bear parts.  Okay, that’s fine, in and of itself.  But that’s hardly a fair trade for passing a bill that will help reelect anti-gun Senators like Hagan, Begich, Pryor, Landrieu (and others) — Senators who will vote to confirm Obama’s anti-gun Supreme Court justices, thus overturning the Heller and McDonald decisions.

Thankfully, your help in asking Senators to offer truly pro-gun amendments paid dividends — and got noticed by the media. Said one media outlet on Monday:

“Gun Owners of America is urging its members to urge their senators to oppose the Sportsmen’s Act unless Reid allows [Ted] Cruz, [Mike] Lee, and [Rand] Paul the opportunity to offer meaningful, pro-gun amendments.”

These Senators, in addition to John Cornyn (R-TX) and Roger Wicker (R-MS), did a yeomen’s job in fighting to get genuinely pro-gun amendments offered to the bill.  These included national concealed carry reciprocity, gun rights for 175,000 military veterans, and a shut-down of Eric Holder’s Operation Choke Point.

But Reid employed a bully-tactic to block all Republican amendments. It consisted of “treeing” the bill and then invoking “cloture” to make the amendments out of order.

Thus, the 41 anti-gun votes IN FAVOR of invoking cloture — thus ending the filibuster — were votes against veterans, reciprocity and gun dealers.

Consider how significant your grassroots efforts were.  All 26 Republicans who cosponsored the bill ended up listening to your collective voice and voted to filibuster — aka, kill — the bill.  They were joined by a handful of anti-gun Democrats who felt the bill didn’t have enough gun control.

So congratulations!  And great work! Your activism is a tremendous asset to our efforts in protecting our gun rights.

ACTION:  Contact your Senators. Thank them if they voted to support the filibuster on S. 2363.  But rebuke them if they supported Harry Reid’s efforts shut off all debate on good, pro-gun amendments.

NOTE: If you click here and use the GOA Engage site, the correct letter will automatically be chosen.

Homeowner Shoots 2 of 3 HomInvaderse , 1 in Chest, 1 in Head