Like a vampire who can’t stop sucking the blood of horrific tragedies, Senate Democratic Leader Harry Reid is once again pushing to suck political gain from the pain of others.

Speaking on the floor of the Senate in the wake of the shooting of three people in Las Vegas, Reid said that the “American people are depending” on the Senate to pass universal gun registry to, supposedly, keep guns out of the hands of people like the Las Vegas killers.

After the Troutdale, Oregon, shooting in a “safety-free school zone,” anti-gun Senator Joe Manchin called for reconsideration of his anti-gun legislation, and one particularly virulent gun-hating TV network took to attacking the Second Amendment every hour on the hour. 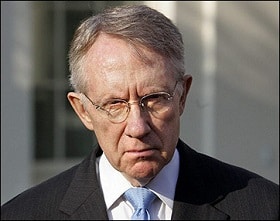 And this was before any information at all had come out with respect to the circumstances of the Oregon shooter — other than, of course, he had been egged on by a blood-soaked media intent on encouraging more murders in order to achieve their political objective of gun confiscation.

In Las Vegas, of course, Toomey-Manchin would have been irrelevant because, while the killer-husband was apparently a “prohibited person,” the wife apparently was not.

So, despite the theoretical bars imposed on her by the doctrine of “constructive possession,” as a practical matter, universal background checks and gun registration wouldn’t have stopped her from purchasing an unlimited number of guns.

So, once again, we have a “solution” which would not have solved the supposed “problem,” but rather is nothing more than another effort to bleed two new media-induced tragedies for political gain.  In fact, what might have helped is if someone in the Las Vegas pizza restaurant, other than the targeted police, had been armed.

But we all know that safety is not Reid’s real objective. Or Manchin’s.  Rather, at a time when Barack Obama and Attorney General Eric Holder are trying to dry up credit for gun stores and thus eliminate them in large parts of the country, Reid’s universal gun registry legislation (Manchin-Toomey) would make sure that you couldn’t buy a gun if you didn’t have access to a gun store.

Thus, if Obama and Holder succeed in shutting down every gun store within 200 miles of you — and Toomey-Manchin passes — the Second Amendment will be effectively dead to you.