Within the past week, Gun Owners of America received an e-mail from a member being treated by the VA (Department of Veterans Affairs).  The member was also receiving Social Security benefits, and Social Security had appointed a guardian to manage his financial affairs.

The member wrote us because the VA, based on the Social Security guardian, was moving to take his guns away. 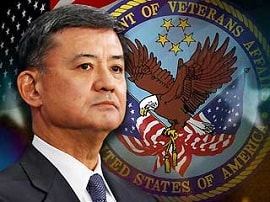 Although it is Standard Operating Procedure for the VA to appoint its own guardians and use this to justify its gun ban on more than 175,000 veterans, it now appears to us that the VA is searching for new “gun ban excuses” to strip even more veterans of their constitutional rights.

Which brings us to VA Secretary Eric Shinseki.  It appears that the Obama administration is so busy using the VA to strip veterans of their gun rights that it doesn’t have time to provide them with medical treatment.

Shinseki was dragged before a Senate hearing Thursday to explain massive waiting lists for treatment.  High level executives at the VA ignored warnings that these lists existed, and agency officials issued falsified letters to conceal them.  Altogether, these delays may have resulted in the deaths of 40 or more veterans at the Phoenix location alone.  The scandal has now spread to at least 10 states, and seems to reflect an endemic problem with the VA.

Shinseki’s response?  He is pushing an Inspector General investigation which will be completed in August.  But even liberal Democrats have questioned how many veterans will die between now and then as a result of the department’s misplaced priorities.

As a result, the American Legion has called to Shinseki’s removal.

Why does this matter to gun owners?

The answer is this:  The VA appears to be too busy with gun bans to do its job.

“We’ve known that combat veterans are being systematically stripped of their rights for some time now,” says Dan Cannon, the founder and editor of GunsSaveLives.net. “There have been numerous reports of veterans losing their gun rights due to seeking counseling or help with depression, PTSD, or for simply not having their financial affairs in perfect order.”

We’re sure that the Obama administration will counter that it doesn’t take much time at all to take away a veteran’s constitutional rights.  But no matter how many personnel or how much time it takes to promote Obama’s anti-gun agenda, it is too much!

This is another example of a phenomenon which is pervasive in the Obama administration:  Politics over performance.

And it’s not going to stop until someone loses his job for pursuing Obama’s anti-gun agenda, at the expense of his department’s mission.

ACTION: Write your Senators and Representative. Encourage them to stand for the Second Amendment rights of law-abiding veterans by demanding VA Secretary Eric Shinseki’s resignation.