It’s become a world-wide problem:  A university in Kenya where 147 students were recently gunned down.

A newspaper publisher in France where over 20 people were either murdered or injured.

Or the long list of schools in the United States where unarmed students and teachers alike are relegated to the status of “sitting ducks,” while armed gunmen — who ignore laws banning guns — carefully and methodically execute innocent people. 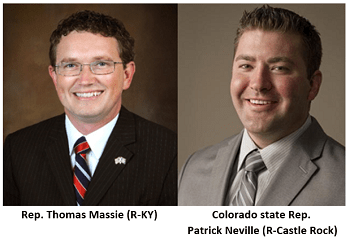 You see, Neville was a student at Columbine High School on April 20, 1999.  On that tragic day, two disaffected students killed 13 unarmed victims, and injured more than 20 others.

The victims included students and teachers, boys and girls, but all of them had one thing in common:  They were shot down like “sitting ducks” in a gun-free school zone — a place where teachers and staff were prohibited by law from defending their lives and the lives of their students.

Clearly, the fact that Columbine High School was a “gun-free zone” didn’t mean that Columbine would be free of guns.  It only meant that the “good guys” wouldn’t have guns.

[The] teachers and faculty [at Columbine] were heroic in many ways that day.  That’s why I truly believe [if] some of them had the legal authority to be armed, more of my friends would still be alive today.

But the tragic situation which killed 13 defenseless victims at Columbine could change soon.  Pro-gun Congressman Thomas Massie (R-KY) has introduced H.R. 86, which would repeal the federal law that bans guns within 1,000 feet of any school.

After all, it was only after the Kohl-amendment outlawed guns in schools that schools became shooting galleries.

Prior to that, there had been isolated instances of school violence.  But, overall, ROTC students had marched back and forth across the campuses of America’s high schools, armed with M1’s — and it hadn’t occurred to anyone that they represented a danger.

Ninety percent of police officers, in a PoliceOne.com survey, agree that mass shootings would decrease if armed citizens were present to engage the shooter.

“Gun-free zones” don’t make places like Columbine free of guns.  They only keep the “good guys” from having guns.