At GOA’s request, Senator Rand Paul (R-KY) has bypassed Harry Reid’s stranglehold on the Senate by bringing a pro-gun bill directly onto the Senate calendar.

The bill is H.R. 4118, and it was approved by the House of Representatives on Wednesday by a 250-160 vote.  (See the vote here, with “Yea” being the pro-gun vote.)  The bill would suspend the individual mandate of the anti-gun ObamaCare program for one year, thus protecting the privacy of gun owners.

Normally, bills that pass out of one chamber are referred to a committee in the other chamber.  But Senator Paul intervened by using a parliamentary technique to bring H.R. 4118 onto the calendar, rather than letting it be referred to a Senate committee.

Now that H.R. 4118 is “on the calendar,” this means that ANY SENATOR can now “move to proceed” to the bill, thereby CIRCUMVENTING HARRY REID’S STRANGLEHOLD over the Senate agenda. 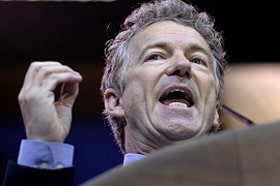 It is important to gun owners because ObamaCare lays the groundwork for taking millions of Americans — those taking anxiety medications or who have PTSD or ADHD — and feeding their names into NICS’s gun-ban database.

It is important because, already, Obama, by executive fiat, has waived federal privacy laws to clear the way for these gun bans.

It is important because it forces weak-kneed senators running for reelection — senators who claim they want to “fix” ObamaCare — to vote, up or down, on whether to let 30,000,000 Americans facing hundreds of dollars of penalties off the hook.

It is important because it opens the door for “motions to proceed” to other pro-gun bills, including legislation restoring veterans’ rights and creating national reciprocity for concealed carry rights (both of which have close to 60 votes).

It is important because it allows us to compile a target list of vulnerable senators who claim they want to “fix” ObamaCare — just as Nancy Pelosi is trying to use a “discharge petition” in the House on the anti-gun amnesty bill to create a target list of GOP members.

Now, we are asking Rand Paul and other senators to begin circulating a letter of support in the Senate for a “motion to proceed” to the ObamaCare suspension, H.R. 4118.

There are procedural niceties to forcing consideration of the motion to proceed, but our parliamentary experts are working with senators to show them how to accomplish this — and to get this bill sent to the President.

But the answer is that sending H.R. 4118 to Obama would put him in a real bind.  We believe that Obama will eventually be forced to delay the mandate, and that H.R. 4118 will create an inextricable conundrum for him — as it will give credit to Rand Paul (and other pro-gunners) in the Congress for having forced the issue.

ACTION: Call or write your senators.  Ask them to support the motion to proceed to H.R. 4118, which will suspend ObamaCare’s individual mandate for one year.