The Fight Against Obama Anti-gun Policies Continues on Multiple Fronts — And there is some good news!

The group Gun Owners of America has for a while now been sounding the alarm about the link between “immigration reform” and “gun control.” — Kurt Hofmann, Examiner, Jan. 29, 2014

Barack Obama is ruthless in his efforts to destroy those he regards as his enemies. And make no mistake about it: Gun owners are Obama’s #1 enemy.

But your hard work is having a tremendous effect.

Thank you all for all your hard work last week in contacting Republican legislators in anticipation of the Republican “retreat” held in Cambridge, Maryland.

As you know, Obama would like to add 8,000,000 anti-gun voters to the rolls through his immigration amnesty bill. 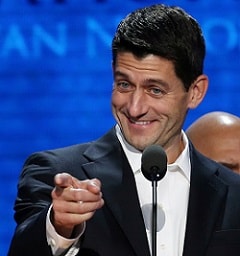 But when House Speaker John Boehner tried to sell Barack Obama’s immigration amnesty proposal as the Republican leadership’s position on the issue, he faced a full-scale rebellion on the part of Representatives whom you were contacting all week long!

According to some of the highly-secret information which leaked out to us over the weekend, Boehner’s speakership may be on the line if he continues to push Obama’s immigration agenda.

Since the retreat, there have even been published articles which seem to indicate that Speaker Boehner might be renouncing efforts to push amnesty reform.

Hot Air reported on Friday that, “Speaker John Boehner, in particular, surprised many in the audience [during the retreat] with his tepid words on behalf of moving forward” on immigration amnesty reform.

Likewise, Rep. Paul Ryan (R-WI) admitted on Sunday that Congress’ ability to pass an immigration bill this year is “clearly in doubt.”

So good work, everyone, in making your voices heard!  The leadership is just starting to get the message.  But we’ll continue to keep a sharp watch out — and will remain steadfast in applying the heat.

Now, here are just a few of the current fights we are waging at the national level — and one issue that needs your involvement.

Today, in the appropriately named Senate HELP Committee (Health, Education, Labor, Pensions), Senators will hold hearings on the nomination of Vivek Murthy to be Surgeon General of the United States.

Make no mistake about it:  Murthy is an anti-gun fanatic.   Not only that, as Surgeon General, Murthy could channel huge amounts of taxpayer dollars to “junk science studies” intended to prove that guns should be banned.

Murthy is co-founder and president of Doctors for America, an Obama-linked organization which has gone to great lengths to push gun control. 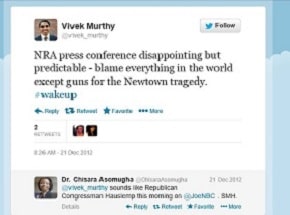 Both Murthy’s personal assistant and press secretary are fellows at a Leftist “think tank” supported by financier George Soros.

The Twitter feed of @vivek_murthy leaves no doubt about how eager the Obama nominee is to restrict gun rights:

After the shooting in Newtown, Murthy’s group authored an open letter to Obama that urged restrictions on gun rights in the name of the medical profession, stating:

It’s time for common sense gun rules like background checks and banning assault weapons and high-capacity magazines, as well as a comprehensive plan to address gun violence including ensuring funding for research and data-collection on gun violence and ensuring that health care providers can ask patients about gun ownership in order to counsel them appropriately about safety measures.

You don’t pop the cork until they bang the gavel.  But, when the Senate Governmental Affairs Committee next convenes to mark up the Postal Reform Act, we are optimistic that Senator Rand Paul will have the votes to pass his amendment repealing the postal service’s ban on guns in post offices and post office parking lots.

This, as from all over the country, we hear horror stories about law-abiding gun owners arrested for exercising their Second Amendment rights — and others who are mugged because they are unable to take their gun on a late-night trip to the post office.

Of course, what the post office is doing is illegal.  But that’s no surprise.  After all, it’s the Obama administration.  What else is new?

Legal or illegal, however, if we allow the gun ban to stand, people can then be arrested in post offices. And few of them will have the legal resources to contest that.

So thanks for all of your good work. We are cautiously optimistic that it will shortly produce success.

Today, the House intends to try to slam through, under quickie procedures, H.R. 3590, the so-called Sportsmen’s Heritage and Recreational Enhancement Act.

At its core, section 804 of the bill provides that wilderness areas (and other federal lands) are open to hunting unless Obama administration officials determine it’s “necessary and reasonable and supported by facts and evidence” to close them to hunting. [See, e.g., section 804(d)(1).]  There are at least some who believe this would give Obama more, rather than less authority to close federal lands.

Some of the provisions, such as using Pittman-Robertson funds for firing ranges, are uncontroversial.  Some, such as electronic duck stamps, have been controversial to many of our members.  Even more important, in the 112th Congress, Senator Jon Tester’s sponsorship of a similar bill was used to rally gun support for the anti-gun senator — and played a major role in getting this anti-gunner reelected.

We expect many of our members may want to oppose this bill in the House.  But, at the very least, we are going to ask our Senate friends to condition its Senate passage on amendments embodying issues of real interest to gun-owners.