Your Activism is Making a Huge Difference!

“Rather than present credible data to counter GOA, [Bloomberg.com] defers to talk of clouds and bunnies, while resorting to nothing more than cumulus fluff.” — Gun rights author, David Codrea, reporting how a Bloomberg hit piece on GOA fell flat (February 20, 2014)

Not a GOA member yet? Click here to join Gun Owners of America!

“I laugh at your foolishness,” said a Bloomberg.com editorialist recently, when commenting on efforts by Gun Owners of America to help stop the anti-gun amnesty bill.

Bloomberg’s hatchet man, Francis Wilkinson, just can’t understand why gun owners would be concerned about legalizing millions of anti-gun voters who broke the law to get here.

In his February 19 editorial, he ridicules GOA (and you) for thinking this could be an “electoral threat” to gun rights.

But as David Cordea writes at Examiner.com: 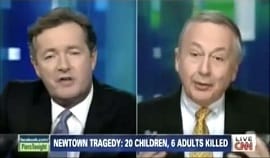 The major problem with Wilkinson’s snottiness is that’s all he’s got. GOA refers people to data compiled by the Pew Research Center, which shows overwhelming preference among “unauthorized immigrants” for the Democrat party. They can also point to Homeland Security Secretary Jeh Johnson’s political advocacy that all illegal aliens “have earned the right to be citizens.”

It must irritate the Left to the Nth degree that groups like GOA are able to reach hundreds of thousands of grassroots gun owners and to mobilize them on key issues.

No wonder the Left has tried to get the IRS to harass conservative organizations like GOA or to place “monitors” in media newsrooms.  The Left does not have the total grip they once had (ages ago), and it drives them crazy.

But thanks to your activism — especially in response to our recent alerts that were aimed at Republicans — the congressional leadership has halted plans for pushing the anti-gun amnesty bill.

It truly is a result of your activism, because your voice has been able to drown out a media Siren Call that, if left unrebutted, would continuously seduce congressmen into doing its bidding.  So thank you all for staying involved.

And speaking of activism … there’s some more good news.

YOU ASKED, WE HEARD YOU!

Some of you have asked us to fix the “submit” button in our Legislative Action (Engage) Center — as it seemed to suggest that a pre-written letter would be sent off to your congressman, prior to your being able to read it.

While that was never the case, the “submit” feature was confusing.  So we addressed this problem.

Now when you go to the Engage Center — after clicking on the Take Action button — you will notice that the button below your address says:  “Continue on to Write a Letter.”

Clicking that button will bring up a pre-written letter that can be amended by you, the activist, or sent “as is.”  As many of you know, you were always able to preview and edit the prewritten letter. But now, it is no longer confusing.

Well, it looks like CNN’s Piers Morgan is calling it quits.

According to the London Times, “Piers Morgan has admitted defeat in the nightly ratings battle and plans to step down from his CNN show.”

But who is the formidable foe that has now handed him his defeat?

Morgan blames “dwindling viewing figures and an anti-gun campaign that alienated a vast swath of his audience had led him to conclude that his show had ‘run its course.'”

How ironic that Morgan blames an “anti-gun campaign” for doing him in.  Anyone who has seen his program more than once or twice knows that HE WAS THE ONE who was drumming the anti-gun campaign.  He never gave the issue a rest, as he continuously distorted facts and insulted opponents who were clearly more knowledgeable than he was.

The Examiner had this to say on Sunday about Morgan’s downfall:  “Cited by more than a few of his critics, one of the better example[s] was when Morgan invited Larry Pratt, the executive director of the Gun Owners of America, to argue the Second Amendment of the United States Constitution.”

Many of you may remember the two fierce debates that took place between Pratt and Morgan over a year ago.

During their first face-off, Piers quickly ran out of arguments and resorted to name-calling and insults –– saying, among other things, that Pratt was an “idiot” and an “unbelievably stupid man.”

But Morgan’s lack of factual data was plainly obvious. Said one reporter, who watches for media bias: “Larry Pratt of Gun Owners of America (GOA) deserves credit for going on the CNN Piers Morgan program … and calmly and rationally taking the arrogant British host completely apart [and] debunking every tired liberal claim about ‘gun control.’”

You can watch those two debates between Pratt and Morgan here and here.

He will still continue to receive GOA newsletters and receive informative gun-related stories and statistics, given the fact that a GOA member gave Mr. Morgan a gift GOA membership after the first debate with Larry Pratt.

Who knows, maybe once Morgan retires, he’ll have more time to read our newsletters!

You can also sign up friends and family members with a gift membership.

Or, sign up yourself if your membership has lapsed.