And GOA submits new brief before the U.S. Supreme Court{flike}

“[New Jersey has] subordinated the People’s right to keep and bear arms to the state’s alleged interest in promoting public safety.  It is not, however, within the authority of courts to override the Constitution as ratified by the People.” — Gun Owners of America’s legal brief before the U.S. Supreme Court in Drake v. Jerejian, February 12, 2014

Pro-gun victories are coming so fast and furiously (no pun intended) that it’s difficult to keep up with them.

Here is a sample of good news. 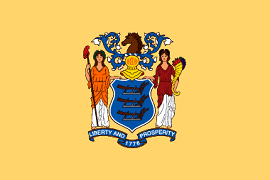 On Thursday, a three-judge panel of the liberal Ninth Circuit Court of Appeals in San Francisco ruled that California’s requirement that applicants for concealed carry permits show “good cause” were unconstitutional under the Heller decision.

“The right to bear arms includes the right to carry an operable firearm outside the home for the lawful purpose of self-defense,” said Judge Diarmuid O’Scannlain.

Gun Owners of America is pursuing an almost identical challenge to New Jersey’s onerous and restrictive concealed carry law.  GOA (and its foundation) filed an amicus brief in the U.S. Supreme Court just one day prior to last week’s Ninth Circuit decision, challenging the New Jersey control scheme that was upheld by the U.S. Court of Appeals for the Third Circuit.

In several instances, the Ninth Circuit opinion critiques the Third Circuit’s opinion by using arguments very similar to the ones GOA presented in our amicus brief.  Overall the opinion is a refreshing change from most lower federal court decisions, which have refused to engage in the textual and historical analysis required by Heller and McDonald.

As we see it, the Ninth Circuit decision should add weight in favor of the Supreme Court hearing one of these cases to resolve the circuit split.  And hopefully the five justice majority from Heller will seize on these two cases because of the Ninth Circuit’s detailed and careful review of the history that supports public carry of weapons for self-defense

Go here to read more about this case — including the GOA/GOF brief.

Go here to make a contribution in assisting Gun Owners Foundation to continue bringing legal challenges like this.

Former Mayor Michael Bloomberg had intended to turn New Hampshire into his most recent “victory for gun control” — joining a handful of states that enacted stricter gun control laws in the wake of the Newton school yard tragedy. 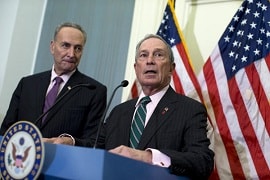 Bloomberg figured that New Hampshire would be easy pickings.  After all, the “Granite State” had a Democratic House of Representatives and a Democratic anti-gun governor.

Gun Owners of America countered Bloomberg’s muscle by aiding several local gun groups in the state to rally grassroots gun owners in opposition to the bill.

Well, the final shootout occurred last Wednesday.  And after the smoke cleared, Bloomberg and his “human props” were sent packing, with their tails between their legs.  After a series of votes — and an hour and a half of parliamentary wrangling — the Democratic House declared that a Manchin-Toomey-type universal gun registry bill was “inexpedient to legislate.”

As a result, Bloomberg has now modified his strategy to turn the country blue by legalizing millions of anti-gun voters who broke the law to get here.  And to that end, Bloomberg has announced that he will use his billions to support “red state Democrats” who opposed the Manchin-Toomey amendment — language imposing universal background checks around the nation — so long as such Senators agree to support the anti-gun immigration amnesty bill.

Three weeks ago, it looked like an immigration amnesty bill to create 8,000,000 new anti-gun voters was on the “fast track” in the U.S. House.

That was before you burned up the telephone lines and internet accounts of House Republicans.  At a Republican “retreat,” dozens of congressmen lined up to oppose the bill.  And Speaker John Boehner was forced to concede that Republicans could not “trust” Obama to implement the enforcement provisions of the bill.

Now, reeling from another defeat, New York Senator Charles Schumer has threatened to file a “discharge petition” to force the House to consider the anti-gun bill, over Republican objections.

The problem is that Schumer, to be successful, would have to convince over a dozen Republicans to openly betray their colleagues, in order to garner the necessary 217 or 218 signatures (depending on the number of House vacancies). For this reason, discharge petitions almost never succeed.

THE IRS BACKS OFF FROM ANTI-GUN REGS

Fresh from a scandal in which it tried to harass conservatives applying for 501(c)(4) tax-exempt status, the IRS has spent the last several months trying to put GOA out of business.

It did this by threatening regulations which would define a broad range of policy activities (including voting guides) as political activities.

But, in its arrogance, the IRS overstepped its bounds.  So many policy-related activities would be limited under the IRS rules that a broad range of both conservative and liberal 501(c)(4)’s blasted the proposals.  In addition, the chairman of the House Ways and Means Committee introduced legislation (H.R. 3865) which would prohibit the IRS regs from being issued.  Given the broad support from both ends of the political spectrum, the Camp bill would surely be passed overwhelmingly.

As a result, the IRS has now meekly testified that it will not push its proposals in 2014.

Go here to make a  contribution in assisting Gun Owners Foundation to continue bringing legal challenges like this.