How Tragedy could have been Averted in France

— GOA credited with killing gun control in the U.S. Senate

“PBS’s new special … credits GOA with dragging Senator Joe Manchin (D-WV) into the light when he tried to cloak his 2013 gun control push with words like ‘compromise’ and ‘loopholes.’” — Breitbart, January 8, 2015

A new PBS special ran this week highlighting the work of Gun Owners of America, along with it’s army of more than one million members and activists. According to Breitbart, which reported on the PBS video this week, GOA “called [Senator] Manchin out” and began pushing other gun rights groups in 2013 by asking GOA members to call the NRA and “urge them to oppose Manchin’s bill.”

When the smoke cleared, Breitbart reports, all the gun rights groups stood “shoulder to shoulder” against Manchin’s gun control bill and defeated it.

AK-47’s are very, very, very, very illegal in France.  Their laws are stricter than California’s.  And while it’s virtually impossible to legally get a gun in that country, most police don’t even carry them, according to Fox Cable News’ Judge Andrew Napolitano.

Yet, this didn’t stop Said and Cherif Kouachi from taking an AK-47s and murdering twelve and injuring 11, right in the middle of Paris — yelling “Allah Akbar” as they slowly and methodically killed their helpless victims. 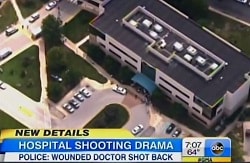 But in the wake of this tragic massacre, GOA posted a video reminder showing how concealed carry holders have stopped mass shootings in this country.

GOA Needs You to Stand “Shoulder to Shoulder” with us this Year!

Congress got back to work this week, so things are going to get busy again.

The new PBS special (mentioned above) is an important reminder that your grassroots efforts make a difference.

So get ready to take action … to forward our alerts … and to put the heat on your legislators.

We also hope that, if you did not renew your GOA membership over the past two months, you will help support our efforts to defend our 2nd Amendment rights by keeping BOTH Parties accountable.

You can sign up for GOA membership for $20 — for less than it costs to buy an average box of ammunition!

As always, we thank you for all your activism and support.