Gun Control Coming to the Senate Floor on Monday

Tell your Senators to, “say no”!

“[Democrats] just spent all year trying to effectively destroy the gun lobby, so why in heaven’s name [should] we give them this Christmas present?” — GOA’s Michael Hammond on the plastic gun ban (ABC News, Dec. 3, 2013)

The U.S. House of Representatives did a very dangerous thing Tuesday — and, apparently, it did so with the consent of one gun organization.

By voice vote, the House slammed through a ten-year re-authorization of the poorly drafted 1988 plastic gun ban.

Lest anyone be confused about how the anti-gun Left views this, USA Today crowed, on the front page of Wednesday’s newspaper that the “HOUSE SAYS YES TO ONE GUN BILL — Plastic gun ban only firearm legislation to pass since November.”

Taken alone, this gives the Obama administration, if it chooses, another three years to use the 1988 law to ban large numbers of guns. 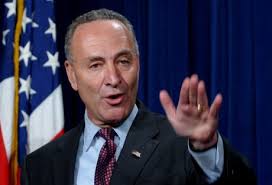 But there is an even bigger danger:  Chuck Schumer held a press conference the same day to indicate that he will use the House-passed bill as a vehicle to pass even more gun control.  We don’t expect to know Schumer’s bill number or language before he actually offers it, but it will purport to deal with guns from 3-D printers, while actually being much broader.

So here’s what we are doing: We are asking our friends in the Senate to put a “hold” on any effort by Schumer to amend the House bill.

The Senate will only be in session four or five days next week before the House goes out for the year, and Schumer may not be able to get time on the Senate floor without “unanimous consent” from all senators.

So, by doing this, we would force Schumer to give up on his vehicle for banning printer-guns if he wanted any reauthorization of the 1988 bill.  If Schumer remains adamant, there will be no re-authorization at all.  Even if he capitulates, we’ll see what happens.

It’s not a perfect outcome.  But we think it’s an outcome we can probably achieve.

ACTION: Click here to Contact your Senators. Ask them to oppose any effort by Senator Chuck Schumer to add gun control to the H.R. 3626, the plastic gun ban reauthorization which passed in the House.

One way to avoid a recall