“The NRA once called mandatory background checks reasonable,” said Minority Leader Harry Reid on Thursday.  “[But] they’re being pushed by — they have a competitor now — Gun Owners of America.” — The Post Oracle, December 4, 2015

Gun Owners of America wants to thank you — our grassroots army — for taking action on such short notice yesterday.

The Second Amendment community handed Barack Obama a humiliating defeat — a drubbing that he is not likely to recover from anytime soon.

And this comes just a few weeks after the Oregon community college tragedy … one week after the horror in Colorado Springs … and one day after the carnage in San Bernardino.

Obama has been nursing his bruised ego since gun owners handed him a stunning defeat in April, 2013. 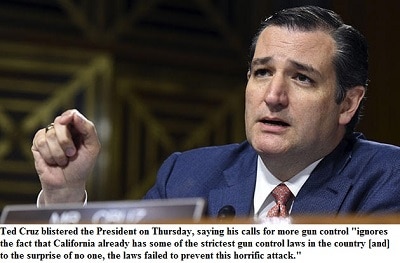 Repeatedly, Obama has said that he is more frustrated by you — the Second Amendment community — than he is by ISIS.

First, by a vote of 48-50 (with 60 votes required), the Senate rejected a Manchin-Toomey amendment to impose “universal background checks” and, hence, universal gun registries on law-abiding Americans.

Second, Obama’s efforts to take away your guns by putting you on a secret blacklist (“watch list”) fared no better.

By a vote of 45-54, this Feinstein amendment fell 15 votes short of the 60 needed for passage.  That vote was also largely party-line, with Kirk again voting anti-gun and Heitkamp voting pro-gun.

Prior to yesterday, Obama had been confident that he could politicize these tragedies — and that the resulting string of copycat massacres would force Congress to adopt gun control.

It’s now become clear, however, that pro-gunners have sealed Obama’s fate as the most feckless and ineffectual president in history.

One media outlet got it right when they said yesterday:

The real reason gun control won’t happen [is that] any Republican who votes for gun control is begging for a primary opponent, backed by a series of vocal and active gun-owners groups, from the National Rifle Association to the more staunch Gun Owners of America.

Of course, it didn’t help Obama’s case that the San Bernardino shootings occurred in a state that had adopted all of his gun control agenda.

Or that the carnage was at the hands of the very types of terrorists which Obama proposes to bring into the U.S. in large numbers.

The ignorance in that statement is astounding!

1) All of the above gun amendments were offered to a bill (H.R. 3762) which would repeal much of the anti-gun ObamaCare law. Gun Owners of America supports this repeal, given that ObamaCare helps facilitate the use of medical information to ban gun owners from exercising their Second Amendment rights.  The ObamaCare repeal passed by a vote of 52-47.

2) Senator Rand Paul (R-KY) offered an amendment to expand gun rights for residents of the District of Columbia.  While the amendment garnered a 54-45 majority, it failed to get the 60 needed for passage.

Unlike the Feinstein and Manchin-Toomey amendments, however, Paul achieved a majority vote, which puts him in a position to tack his pro-gun legislation to another bill.