“We look at [the plastic gun ban] as an infringement,” said GOA’s Erich Pratt.  “The law does nothing to keep undetectable guns out of the hands of criminals [who have] no regard for the law in the first place.” — The Hill, November 28, 2013

URGENT ACTION: The House did not take up the plastic gun ban yesterday.   So please continue contacting your legislators — especially your Representative — with today’s new message.  The House will most certainly vote today.  If you can, please call your Rep. at 202-225-3121.

Gun ban would be mischief for an anti-gun administration.

Sometimes it takes decades for a poorly-drafted anti-gun law to rise up and bite you. The 1968 gun ban for “mental defectives” sat around for 25 years before an anti-gun Clinton administration decided to use it to disarm more than 150,000 law-abiding veterans who had never been before a court.

The “plastic gun ban” is another massive time bomb sitting in federal law. And it will be reauthorized (for as much as a decade) in the next two weeks — if we don’t stop it.

The “Security Exemplar” is a piece of metal that the ATF uses to calibrate how much steel a manufacturer needs to put in the gun to make it beep in the metal detector.  Other than the fact that it has to contain 3.7 ounces of steel and look sort of like a gun, anti-gun Attorney General Eric Holder can determine, by regulatory fiat, the characteristics of the Exemplar.

He can determine whether you test guns with a “top flight” metal detector — or a crummy one. He can determine how many times (or thousands of times) a gun has to pass in order not to be banned. 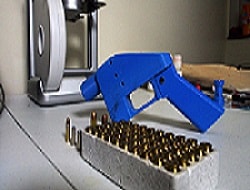 In addition, every “major component” of every firearm has to pass through an airport x-ray in such a way that its shape is “accurately” depicted [18 U.S.C. 922(p)(1)(B)].

The statute contains a list of parts of guns which are definitely “major components.”  But is that list exclusive?  If we didn’t have a President and an Attorney General who have violated and perverted the law again and again and again, we might be able to conclude that it was exclusive.  But the language is not so definitive as to protect us against an administration intent on destroying us.

So what if Holder determines that a wooden stock is a “major component”?

So, for those Republicans who are talking about locking us into an extension of this statute that could ban lots of guns … tell them, “please don’t.”

A couple of more points:

* It is simply not true that, if this statute is allowed to lapse, “killers can freely go into airports, courthouses, and schools to commit mass murder and mayhem.”

X-ray machines will pick up the images of plastic guns.  And, unfortunately for the safety of the inhabitants, guns in airports, courthouses, and schools will remain illegal under 18 U.S.C. 922(q) and 930.

* And it is foolish to assume that the Jared Loughners and Adam Lanzas of the world — intent on committing mass murder — would somehow be deterred by a plastic gun ban.  That genie is already out of the bottle.

* Finally, it appears that New York Senator Chuck Schumer would like to take the potentially significant gun ban and expand it even further.

Thursday, November 21, Schumer tried to pass an expansion though the U.S. Senate by unanimous consent without even usual a standard Senate procedure for notifying other senators, called hot-lining. Almost two weeks AFTER HE TRIED TO PASS IT, the text of the Schumer bill was still not available.

ACTION: Click here to contact your senators and representative.  Tell them to oppose this effort to ban guns with wooden stocks. Call him or her at 202-225-3121.