It’s what GOA has been calling for.  We’ve been begging Republicans to use any and every bill that comes before the Senate and to offer a repeal or delay of the ObamaCare mandate as an amendment.

And yesterday, Senator Mitch McConnell did just that.

McConnell proposed a Unanimous Consent agreement that would allow Obama’s unemployment insurance extension to move forward — if REID WOULD SIMPLY GUARANTEE A VOTE ON DELAYING THE ANTI-GUN OBAMACARE MANDATE.

As we alerted you yesterday, we have seen where the anti-gun ObamaCare mandate is leading — with HHS regulations to waive all federal privacy laws in order to allow psychiatrists to turn in gun owners to the FBI’s NICS system. 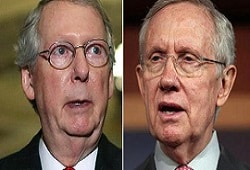 This could potentially affect millions of gun owners!  And this is just one reason why Gun Owners of America has been opposing the ObamaCare mandate for several years.

So let’s review the bidding:  68% of Americans want to delay the anti-gun ObamaCare mandate.  Only 55% want to extend unemployment insurance.

Also remember this:  Republicans are not demanding that the ObamaCare mandate be delayed.  They’re only asking for a vote.

Not surprisingly, anti-gun crazies like Senators Dick Durbin and Chuck Schumer are outraged.

And six Republican defections gave them the 60 votes to overcome the filibuster and move the bill forward — though it still remains to be seen whether they can get 60 votes to shut out any amendments on the bill itself.

And, as we saw with April’s gun control votes, the ability to get 60 votes on the “motion to proceed” to a bill is not always the same as getting 60 votes to shut out amendments on the underlying legislation.

In other words, there is precedent where we have lost the initial “motion to proceed” vote but still won in the end.

But McConnell is right.  Before Harry Reid came on the scene, senators had a right to offer amendments dealing with the key issues of the day.  That Republicans have been forced to use this strategy is an indication of how ruthlessly partisan Harry Reid and Barack Obama have become.

Should you lose your gun rights if you visit a shrink?