Yet another judicial nominee willing to trample on our rights!

Ask your Senator to oppose the gun-hating nominee, Robert Wilkins

The Senate Judiciary Committee will soon begin the first step in taking anti-gun judges and “court-packing” them into what is widely regarded as the nation’s second-most-important court — the D.C. Circuit Court of Appeals.

And, unlike anti-gun judges with no “paper trail,” the nominee, Robert Wilkins, (pictured below and right) has a particularly virulent anti-gun record.

Wilkins was the D.C. District Court judge who decided, last year, that non-resident U.S. citizens do not have the Second Amendment right to purchase a firearm [Dearth v. Holder, 893 F.Supp. 59 (2012)].

Dearth had contended that federal firearms laws and regulations made it effectively impossible for a U.S. citizen residing in Canada to purchase a firearm in the United States. 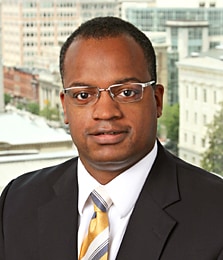 Wilkins responded, in his opinion on “Second Amendment Claims,” that it didn’t matter if a U.S. citizen was legally barred from purchasing a firearm in the United States, because he already owned a gun in Canada and was free to bring it into the country.

What?  So if you already own a gun, the Second Amendment doesn’t prohibit the government from preventing you from purchasing another one?  This comes perilously close to saying that the Second Amendment protects only possession of firearms, and not sales.  Hence, this “pre-existing gun argument” could just as easily be used to ban all purchases and sales of firearms by U.S. citizens in the U.S.

This is made even worse by the context in which Wilkins’ nomination is being pushed. Currently, the D.C. Circuit Court of Appeals is not exactly a conservative bastion. Although it overturned the District of Columbia’s “Banana Republic” anti-gun laws in the Heller case — as did the Supreme Court on appeal — it upheld ObamaCare and perhaps provided momentum for the Supreme Court to do the same.

Nevertheless, the Obama administration would like to turn the critical D.C. circuit into a liberal stronghold like California’s Ninth Circuit — and it is threatening to blow up the Senate rules in order to do so.

ACTION: Please Click here to contact your Senators and demand that they oppose the nomination of anti-gun zealot Robert Wilkins to the D.C. Circuit Court of Appeals.

Please note that the vote in the Senate Judiciary Committee is JUST THE FIRST STEP.  If Wilkins is voted out of the committee, then the full Senate will vote on him soon afterwards.  The committee vote is expected on Thursday.