It’s back to the House we go!

— The battle moves back to the House

“The only way to avert disaster is to fully repeal this anti-gun, ObamaCare monstrosity.  [At] a minimum, funding for ObamaCare should cease immediately.” — GOA statement in postcards landing on congressional desks over the past several weeks

The Senate today, by a vote of 79-19, overcame the Cruz-Lee filibuster that was aimed at defunding the anti-gun ObamaCare law. The Senate action allowed Majority Leader Harry Reid to amend the Continuing Resolution by reinserting funds for ObamaCare — funding that the House had stripped out last week.

Many of the speeches today on the Democrat side of the aisle lambasted Senators Ted Cruz (R-TX) and Mike Lee (RUT) for trying to “slow down the legislative process” and for threatening a government shutdown.

What each speaker ignored, however, was that Senate Democrats could have passed the House version of the bill (without funding for ObamaCare) and sent it to the President TODAY.  This would definitely have avoided the very shutdown they were supposedly trying to avert.

The battle now moves back to the House where Republicans will have to decide whether they are going to stand tough or give in to Harry Reid’s wishes.

This fight is incredibly important.  Some pundits think that the implementation of ObamaCare will result in the health care system “falling apart on its weight.”  So they say we shouldn’t fight this now, because losing today will result in us winning tomorrow.

The problem with that thinking is this:  Can anyone name just one example of socialism that, once implemented in this country, was later fully repealed?  One would be hard-pressed to think of such an example. 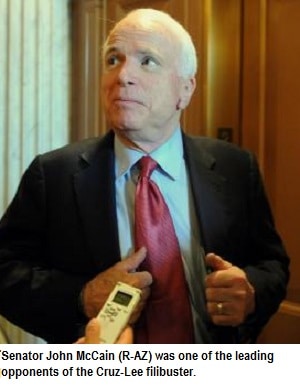 The consequences for gun owners — once ObamaCare is implemented — will be immense. Once the government starts using medical maladies (such as PTSD, ADHD, etc.) as reasons to put our names in the NICS system, will those names ever be removed?

Just ask the more than 150,000 military veterans how it’s going for them!

That’s why fighting this anti-gun monstrosity RIGHT NOW — before this law gets implemented — is so important.

1) In the Senate: Hold accountable those Senators, who voted AGAINST Cruz and Lee on the filibuster — especially, Republican Senators. They are:

You can tell these Senators: “Don’t tell me that you oppose the anti-gun ObamaCare law, given that you voted to end the CruzLee filibuster!  By voting to ‘cloture’ the bill, you allowed ObamaCare to be funded by only 51 votes.  Don’t give me a year’s worth of pronouncements as to how you oppose ObamaCare, because when it really came down to the vote that counted, you bailed. Shame on you.  I will ‘remember in November!’”

2) In the House: Please urge your Representative to OPPOSE the Senate-passed version of the Continuing Resolution.  Tell them to support language which continues to defund ObamaCare or its mandate.  You must act quickly, as the House could act as soonas Saturday or Sunday. Please email AND call (202-225-3121).

Please click here to contact your representative – If the information fields are populated with someone else’s data, simply click the “Not You” at the top of the page and that should clear up the problem.