House Bill to Protect Gun Owners from Being Framed

ACTION: Click here to urge your Representative to cosponsor H.R. 2753, a bill that will protect innocent gun owners from getting railroaded by the ATF.

Last week, Rep. Jody Hice (R-GA) introduced a bill that will protect many gun owners from being framed by Obama’s Bureau of Alcohol, Tobacco, Firearms and Explosives (ATF).

H.R. 2753, or “The Fairness in Firearms Testing Act,” would require the ATF to make a videotape of any guns they test and to make those recordings available to everyone. 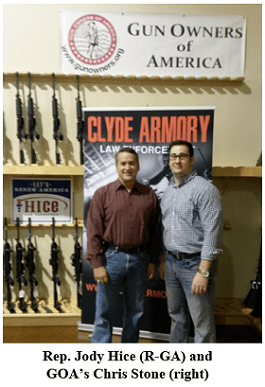 Rep. Hice — an A+ rated freshman who was strongly supported by Gun Owners of America in his initial bid for Congress — wants to protect gun owners from official harassment. His bill would require the ATF to visually document (via recordings) any of its gun testings. This is extremely important, given their controversial decisions where they’ve classified semiautomatics as full automatics.

Gun Owners of America has worked with law-abiding Americans who have been victimized by ATF’s “secret tests.” And we are disgusted by the bureau’s refusal to release testing information which does not comport the results ATF desires.

The Obama administration claims to value transparency. But ATF has been less than transparent when it comes to testing that affects the livelihood of thousands, the constitutional rights of millions, and the potential criminal liability of many.

You can help by urging your Congressman to cosponsor H.R. 2753.

ACTION: Please urge your Representative to cosponsor H.R. 2753, a bill that will protect innocent gun owners from getting railroaded by the ATF.