Obama Nominates a Radical Anti-gunner to the Supreme Court

Click on the Take Action button and demand that your Senators to SAY NO to President Obama’s anti-gun Supreme Court nominee Merrick Garland.

Today, President Obama took the most significant step in his sordid trail toward transforming our nation. 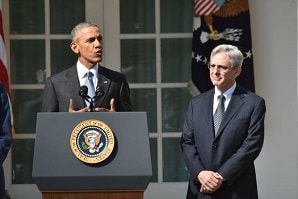 Obama nominated a virulent anti-gunner to fill the seat of Antonin Scalia on the Supreme Court.

Let’s be clear:  the U.S. Senate should bury this nomination and write “Dead On Arrival” as its epitaph.

Despite promises to nominate a consensus candidate, Obama has chosen a radical leftist in Judge Merrick Garland:

1) He supported the DC gun ban in 2007, voting to reconsider the Heller case after a three judge panel had ruled against the ban.

Hence, we don’t have to speculate as to how Garland would vote on Heller if confirmed to the Supreme Court — he’s already voted against Heller once before, thereby showing he’d effectively rip the Second Amendment from the Constitution!

2) In a 2000 case, Garland voted to maintain the registration of gun owners, supporting efforts by the Clinton administration to use the instant check to illegally retain gun owners’ names for six months.

This shows that Judge Garland not only hates the Second Amendment, he supports the ability of a President to illegally use executive power to advance liberal causes.

There is no freedom more fundamental than the right to defend one’s life and family.  The Heller and McDonald decisions are hanging by a thread, as both were decided by 5-4 majorities.

If Garland were confirmed, we can expect to see him vote to effectively rescind the Second Amendment. That means we’ll see more gun registration, more gun bans, and more restrictions on carrying firearms — all of it approved by the Supreme Court.

As a practical matter, good people will go to prison for exercising their constitutionally-protected rights.

We know that Obama and the Court can’t abrogate the 2nd Amendment — not legally.  The Constitution supersedes any unlawful action to the contrary.

But a change in the Court — with the anti-gun decisions that follow — will give the “green light” for all kinds of gun registration and gun bans.

In their oaths of office, Senators did not swear to rubberstamp any and all judicial nominees put forward by the President.  No, they swore to “support and defend” the Constitution.

Pushing through a nominee who is committed to eviscerating the Second Amendment would violate their oaths.

However, they would uphold their oaths of office by throwing this nomination into the garbage can of history.

Tell them to uphold their Oath of Office by opposing ANY Justice that would trample upon the Second Amendment.