Yesterday Was a Horrible Day for the Second Amendment

Please call the President immediately at 202-456-1111 or 202-456-1414 and tell him that you do NOT support one word of the gun control measures that he’s supporting. Let him know that you will surely “remember in November” if he does NOT get off his anti-gun agenda. And click here to send emails to your Senators with the same message.

Trump Drops the Gloves and Becomes the “Gun-Grabber-in Chief”

Lewis G. Carroll said it first: “First the execution; then the trial.”

On Wednesday, Donald Trump echoed that sentiment when he said: “Take the guns first; go through due process later.” 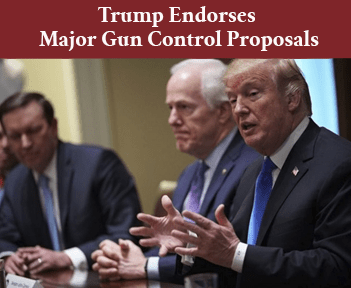 Well, that’s not exactly the way due process is supposed to work.

But Trump made these comments — and more — at a roundtable meeting with several congressmen at the White House.

He supported various gun control proposals and vowed to take on the gun lobby to get his measures passed.

That’s why I need to you make one important call today.

You must call the President immediately and tell him how deeply disappointed you are by his betrayal of gun owners, who he actively courted prior to the 2016 elections.

And, let him know that you will surely “remember in November” if he does NOT get off his anti-gun agenda.

Under these laws, the police or a relative or perhaps a government official could convene a secret court proceeding (called an ex parte hearing).

The gun owner would NOT be allowed to attend or make his or her case to the court.

And, in fact, the first they would know about it is when the SWAT team arrived at the door to ransack their house and, if they resisted, to arrest or even shoot them. This is what happened at Ruby Ridge.

Leftist anti-gun Senator Amy Klobuchar (D-MN) suggested to a beaming Trump that anyone you had ever dated should also be able to convene a secret proceeding to take away your guns.

Wow! Talk about driving a stake through the heart of the Second and Fourth Amendments.

This will open up our gun rights to horrific abuse — as people will be able to take revenge against you to take away your rights, as happened to Shane Morgan in Oregon.

How ironic that just a few weeks ago, the President said in a tweet, when talking about one his aides, that, “People’s lives are being shattered and destroyed by a mere allegation…. Is there no such thing any longer as Due Process?”

Apparently, due process is needed for people in the White House, but not for people who may be falsely accused and have their Second Amendment rights stripped from them.

Incidentally, the Gun Confiscation Orders would have done no good in Parkland, where the shooter was judged to be “low risk.”

But he COULD have been barred from buying a gun if he had been brought up on felony charges during any of the 40-50 police visits. And NEWS FLASH: Holding a gun to someone’s head IS a felony.

Not only that, he could have been deterred from even attacking a school if he knew, in advance, that there were armed adults inside the building.

But the gun confiscation orders were just the beginning of Trump’s anti-gun love-fest.

The “base bill” for Trump’s comprehensive anti-gun package is the proposal introduced by Senators Joe Manchin (D-WV) and Pat Toomey (R-PA) from 2013 — legislation that is commonly known as Universal Background Checks.

Under that bill, if you wanted to sell your gun to your neighbor … you and he would have to go to the nearest FFL … pay whatever fee he chose to charge you (without limit, but you can expect to be AT LEAST $50 poorer) … and then HOPE that you’re not one of the eight percent of all Brady Check purchasers who receives a “YELLOW” (hold) response.

At the very least, this would mean you would have to make two trips to the gun store. However, under very technical language in the 2013 version, it may be that you would NEVER be able to buy the gun.

Of course, the other problem with Universal Background Registration Checks is that the ATF is currently routinely making copies of 4473’s in many parts of the country.

Think about it, if everyone has to get a 4473 under Universal Background Checks, then everyone and their gun will appear in that national registry.

So, right now, Universal Background Registration Checks are being supported by less than half the Senate. But don’t be surprised if President Trump starts twisting arms to get more votes.

Then there’s Feinstein’s semi-auto ban, which Trump also entertained as a possibility. Her bill would probably get roughly 35 votes in the Senate.

Trump openly asked Manchin and Toomey to accept the Feinstein semi-auto ban, which would ban millions of semi-automatic firearms — and would ban standard capacity magazines, as well.

Concealed carry reciprocity was brought up at yesterday’s meeting.

But Trump rejected this bill as “unachievable,” even though it has already passed the House and has 55-60 votes in the Senate, based on our extrapolation of the 2013 vote on reciprocity in the Senate.

So to recap: A PRO-gun reciprocity bill with 55-60 votes is “unachievable” for Trump, but two horrendous, ANTI-gun bills supported by less than half of the Senate are the core of Trump’s agenda.

What does that tell you about Trump’s view of the Second Amendment — and the gun lobby?

Finally, there is Trump’s continued push to disarm hundreds of thousands of soldiers and sailors — who are perfectly capable of carrying a full automatic in Baghdad or Kabul — but they will return to the U.S. to be treated as second-class citizens if Trump raises the age to purchase a long-gun to 21. 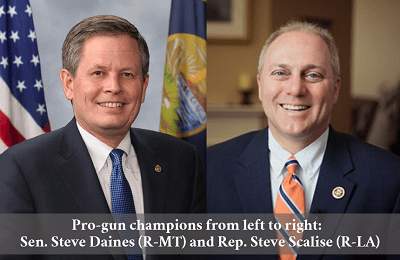 Perhaps the only bright spot in Wednesday’s meeting was that Trump reiterated his support for arming teachers.

However, by the end of the meeting, it seemed pretty clear that Trump would not fight for this if it meant the death of the gun control package.

Did Trump just throw the 2018 elections?

Donald Trump has said, repeatedly, that he’s prepared to “take on” the Second Amendment community if we resist his agenda.

If he had said that two years ago, he wouldn’t have been the Republican nominee.

So Donald Trump is about to learn a very hard lesson. The liberal media and the Democrats will hate Trump no less because of his betrayal of his base.

And, in fact, his actions will serve to energize the Left, just as he tries to weaken the people who elected him.

It’s possible that Trump just threw the 2018 elections by depressing turnout by his base.

Again, it is imperative that we bombard the White House with phone calls.

Let the President know that he cannot expect to keep the support of the gun owners he courted if he’s going to shred the Constitution in the manner that he is proposing.

And click here to send emails to your Senators with the same message — with special messages prepared for Republicans or Democrats.

Since Newtown, States Have Passed Hundreds of Gun Laws. Most Expand Access.