Let’s put an end to this thing…here and now. 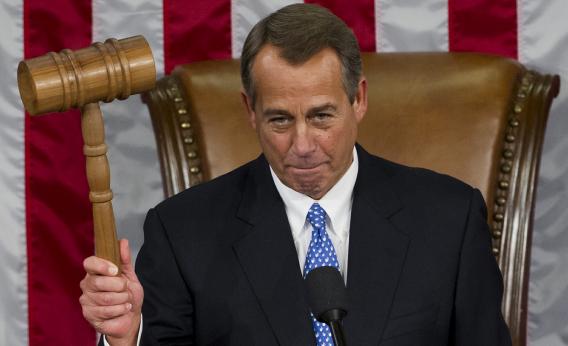 The Stockman-Broun letter urges Speaker Boehner to support the Hastert Rule as a mechanism for killing all gun control.
Both Reps. leading the way to defeat ALL gun control
{flike}

We’ve seen this happen a dozen times in the past 45 years:  Anti-gunners introduce legislation to ban most guns or set up a national gun registry.  And, too often, so-called “pro-gun” legislators negotiate a “compromise victory” for gun control advocates.

Of course, the “compromise victory” merely serves as a platform for the next round of gun control demands.

We’re sick and tired of having our congressmen parse our survival with enemies who want to destroy us:

* In the Senate, Tom Coburn (R-OK) is, sadly, working on gun control “compromise” with the most notorious gun grabber in the Senate — none other than Chuck Schumer himself.

* In the House, Congressmen like Paul Ryan (R-WI) have indicated that they might support a ban on private sales at gun shows — stating that private gun buyers should first get the permission of the government (as if that would stop criminals from getting guns).

This is outrageous and a betrayal of American gun owners!  Gun control would do nothing to stop the shootings in Newtown, Aurora, and Tucson.  And we’re sick and tired of crooked politicians who want to exploit these tragedies for political gain.

The very liberal and anti-gun Ed Rendell — who is the former Democrat Governor of Pennsylvania — summed it up pretty well when he said anti-gunners were “lucky” Newtown was so horrific. If a conservative said this about an act of terror, there would be a national uproar. But liberals say these things with impunity.

We are not willing to give moral monstrosities like Rendell a single word of anti-gun law.

And the way to stop it is for pro-gun Congressmen to sign the Stockman-Broun letter, which would petition the Speaker of the House toobserve the “Hastert Rule” with respect to anti-gun legislation.

Under the Hastert Rule, no gun control could be brought to the floor unless it was supported by a majority of the Republican caucus -– 117 Republican representatives.

As we stated in a previous alert, we believe that gun control should die if only one constitutionalist-representative opposes it — or even if none do.  But, as a practical matter, if 117 congressmen sign a letter demanding that Boehner not bring up a gun control bill opposed by those 117 congressmen, gun control will die.  Without that letter, Democrats will join with anti-gun Republicans, and gun control will pass.

Enforcing the Hastert Rule would prevent MSNBC and the Obama administration from doing what it has discussed incessantly:  Forming an anti-gun coalition between House Democrats and a handful of “blue state” Republicans, who would be picked off, one by one.

The Republicans hold a majority in the House.  We should encourage them to “man up” and start determining the agenda, and not let the anti-gun Democrats determine it!

ACTION:  Click here to contact your Representative.  Urge him to sign the Stockman-Broun letter.  Please note that there are two different action responses for you to send, and the system will automatically send that response, depending upon whether your congressman is a Republican or Democrat.

Former NFL Player Not Afraid to Be ‘Politically Incorrect’ on Gun Violence: ‘Gun Laws Are Not Going to Fix the Problem’