Could you please give this guy a call?

Click on the Take Action button to urge Governor Brownback to take decisive action to protect Kansas residents against the lawless anti-gun maneuverings of the departing remnants of the Obama administration.

I need your help in assisting two pro-gun patriots in Kansas.

I’ve already taken action — and you can read my letter here.

Now I’m asking you to take less than 60 seconds to contact Governor Sam Brownback on these gun owners’ behalf.

After all, I’m sure these two victims of gun control would do the same for you.

Here’s what is happening.  In 2013, Kansas passed legislation to prohibit the federal government from regulating guns and gun parts which were made in Kansas and bought and sold in Kansas — so long as they stayed in Kansas. 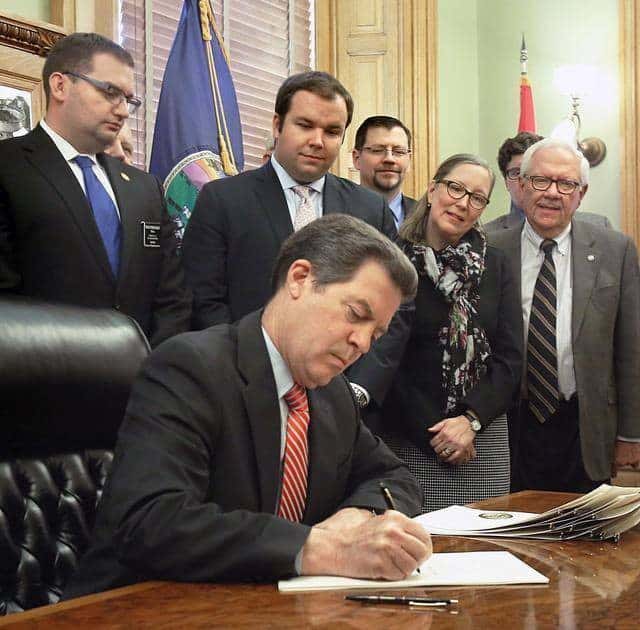 The argument was that “Kansas guns” fell within the jurisdiction of Kansas law — and had not traveled in “interstate commerce” in a way that would allow the federal government to regulate them.

This Kansas Second Amendment Protection Act even made it a crime for a federal “official, agent, or employee of the government of the United States … to enforce or attempt to enforce” federal law with respect to a “Kansas gun” — and made such an effort a level 10 nonperson felony.

The lawless Holder also couldn’t care less about U.S. law — as evidenced by the fact that he was the first U.S. Attorney General to disgrace his office by being held in contempt of Congress.

Brownback responded to Holder’s lawlessness with a letter stating that the pro-gun Kansas law “expressed the sovereign will” of the people and state of Kansas.

Almost four years later, two Kansans — Shane Cox and Jeremy Kettler — are on the verge of being sentencing to prison Monday, because they relied on Kansas law and manufactured various sound suppressors which were intended for use wholly within the jurisdiction of Kansas. 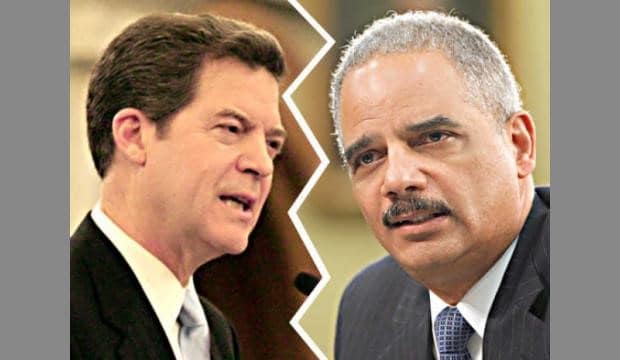 Obama/Holder holdovers in the U.S. Attorney’s office in Kansas are prosecuting Cox and Kettler for manufacturing suppressors regulated by the National Firearms Act (NFA) without getting an NFA license.

They have been convicted and are scheduled for sentencing Monday, even though legislation pending in Congress would completely repeal NFA regulation of suppressors.

The question now becomes whether a Kansas law passed by the legislature and signed by the governor is worth the paper it is printed on.

And the answer to this question will largely be determined by Governor Brownback.

The first question is whether the state of Kansas will ask the judge and the Justice Department to postpone the sentencing until Attorney General nominee Jeff Sessions can be confirmed and can review the questions at stake in the prosecution.

There is every evidence that Sessions would honor the Kansas law — thereby reversing the position of his ruthless predecessor.

Brownback could also ask Sheriff Jeff Easter of Sedgwick County to do his duty and protect Cox and Kettler from the unlawful actions of the U.S. Attorney-holdover.

Brownback could even (gasp!) enforce Kansas law and bring charges against the U.S. Attorney.

Whatever he chooses to do, the governor needs to stop the lingering vestiges of the Obama administration from giving one last obscene gesture to the Second Amendment as they make their way out the door.

So please contact Governor Brownback.  Urge him to take decisive action to protect Shane Cox and Jeremy Kettler from the lawless maneuvering of the departing remnants of the Obama administration.

P.S. Please contact Governor Brownback and urge him to take decisive action to protect Shane Cox and Jeremy Kettler. You can also call his office at 877-KSWORKS (877-579-6757).