It’s Time to Strike Back Against the Empire

“Never tell me the odds.” – Han Solo in The Empire Strikes Back

On January 4, the President of the United States declared war on gun owners.

His lawless, anti-gun power-grab potentially threatens every gun owner in the country.  It represents one of the boldest executive actions against gun owners in history. 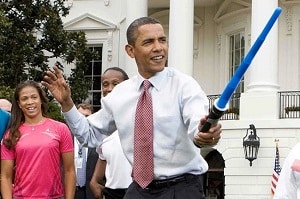 First, there’s his efforts to turn collectors and hobbyists into “gun dealers.”

This would take us back to the “bad old days” in which the ATF tried to imprison collectors who sold only a couple of firearms.

Under Obama’s new amorphous standards, even the sale of a single gun could land you in prison.

So the liar-in-chief is trying to set a trap in which collecting firearms is effectively outlawed.

Second, there’s Obama’s 200 new ATF agents proposed, not to arrest the violent drug dealers he wants to release on the streets, but rather to feed more 4473’s into Obama’s burgeoning national gun registry.

Then there are the efforts to:

* Use taxpayer dollars to develop “smart gun” technology, which would ultimately be required;

* Slap gun loss reporting requirements on the gun industry that could easily entrap large dealers; and

Obama has declared war on gun owners.  It’s now time to strike back.

Here’s How We Can Hit Obama Where it Hurts!

President Obama is looking for a “legacy” piece of legislation to help salvage his flailing presidency.

During his State of the Union Address on Tuesday, he expressed his desire to “work together this year on bipartisan priorities like criminal justice reform ….”

In fact, the Republican Judiciary Committee Chairman in each chamber — Iowa Sen. Chuck Grassley and Virginia Rep. Bob Goodlatte — are leading the charge on this legislation.

But truly constitutional conservatives like Ted Cruz of Texas and Jeff Sessions of Alabama have opposed this legislation — and even voted against the bill in the Judiciary Committee.

These pro-gun Senators oppose the sentencing reform for good reason.

This legislation would increase prison sentences for gun owners, at the same time as it lets tens of thousands of drug dealers loose on the streets.

And it could come up in the Senate in a few weeks.

Which leads us to an obvious conclusion:  If Mitch McConnell brings up the anti-gun sentencing bill, senators MUST amend it to repeal Obama’s anti-gun “executive actions.”

It’s bad enough that Republicans are pushing this anti-gun bill, while seeking our votes.

But to pass Obama’s anti-gun “legacy” sentencing bill, while doing NOTHING about the unconstitutional anti-gun executive actions which Republicans claim to oppose would tell us, once and for all, that the GOP is as contemptuous of the Second Amendment as the Democrats are.

So please contact Senator Ted Cruz.  Thank him for opposing the anti-gun sentencing bill.  And urge him to offer amendments to defund every element of Obama’s illegal “executive action” if Majority Leader Mitch McConnell forces the bill to the floor.

And contact Senator Mitch McConnell.  Tell him that you are opposed to moving the anti-gun “Obama legacy” sentencing bill at the same time Obama is spitting on the Constitution through his unlawful “executive actions.”

Please take action today!  At the very least, this anti-gun bill needs to go to the floor with amendments outlawing every part of Obama’s anti-gun executive action.