Two Reciprocity Bills: A Strong Bill versus a Compromise 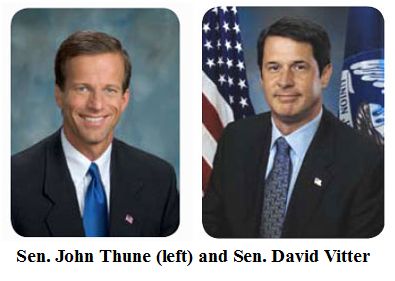 Pro-gun Senate champions John Thune (R-SD) and David Vitter (R-LA) have decided to stand their ground on their concealed carry reciprocity legislation, despite pressure from gun rights compromisers to weaken the bill.

Specifically, Senators Thune and Vitter are sticking with their version of the bill, which recognizes the right to carry concealed by residents of “Vermont-style” and “Constitutional Carry” states. 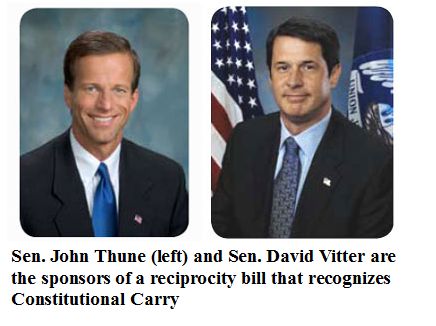 Such states do not require residents to obtain the government’s permission before carrying a firearm for self-protection.  There are currently 17 states that have either enacted legislation in the past or have introduced “Constitutional Carry” laws in their legislatures this year.

More states are being added to the list all the time.  The Thune-Vitter legislation will fully recognize gun owners’ rights in these states.

A competing bill, however, pulls the rug out from under “Constitutional Carry.”  Sponsored by Senators Mark Begich (D-AK) and Joe Manchin (D-WV), the compromise bill still requires a government permit for reciprocity, regardless of state law.

So while the states are moving in the direction of more freedom, the Begich and Manchin bill would keep even the most pro-gun states tied to a permitting system.  Why are they doing this?  After all, criminals don’t get in line at the police station to get a permit.  It’s the law-abiding gun owners who go through the process of proving their innocence before being “allowed” to carry a firearm.

We have a message for Begich and Manchin: gun ownership is a right, not a privilege.

It is vitally important that your two Senators hear from you right away.  Urge them NOT to support the compromise bill, and instead support the pro-gun legislation offered by Senators Thune and Vitter.

ACTION: Contact your Senators.  Insist that they cosponsor the strong pro-gun Thune-Vitter reciprocity bill, which protects Constitutional Carry, and urge them not to support the Begich-Manchin compromise.

[readon2 url=”http://capwiz.com/gunowners/issues/alert/?alertid=61092561&PROCESS=Take+Action”]Click here to send a prewritten message to your Senators.[/readon2]