AL: Let’s Make 2022 the Year for Constitutional Carry in Alabama

It’s Time for Alabama to Join the Constitutional Carry Club

Regrettably, Alabama was not one of those states. But Gun Owners of America is committed to restoring the rights of Alabamians to defend themselves without government bureaucracy.

Some Alabama Sheriffs Are Ignorant on Constitutional Carry

Sadly, some of the biggest opponents to Constitutional Carry are local law enforcement officials.  These sheriffs are out of touch with the Constitution. 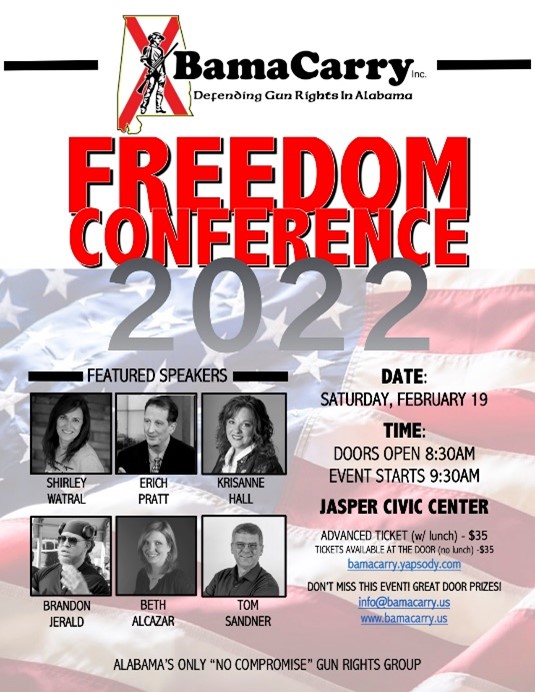 In many parts of the country, law enforcement agencies and organizations support the dismantling of permitting schemes. Consider the Maine State Police which agreed with — and even testified in support of — Constitutional Carry in the Pine Tree State. In North Carolina, the Sheriff’s Association recently abandoned its longstanding support of pistol purchase permits.

So why would these sheriffs stand in the way of Constitutional Carry? Perhaps they are worried about losing the revenue generated from permitting schemes.

While the government shouldn’t profit by selling rights back to its citizens, this worry is not even legitimate. When Idaho and Arizona adopted Constitutional Carry, those states actually saw an increase in citizens applying for carry permits.

With over 20 states that have removed the need for carry permits, the results are clear. Simply put, Constitutional Carry will make Alabama a safer and freer place to be, but your state legislators need to hear from you now.

The legislative session will begin very soon, so gun owners need to get active now to get Constitutional Carry moving and to combat the anti-gun messaging.

So please take action and contact your state lawmakers now!

GOA’s Erich Pratt will be speaking, and you’ll have a chance to learn more about how to get involved with GOA’s efforts in Alabama.

You won’t want to miss this event. You can learn more and get tickets here.