ACTION ALERT: Trump Needs to Hear From You

Anti-gunners are exploiting the heart-breaking tragedies in Dayton, Ohio and El Paso, Texas to try and BAN AR-15s and AK-47s — and to impose “Red Flag” Gun Confiscation Orders.

With Congress on recess, anti-gunners are trying to make enough noise to convince President Trump to take executive action against the Second Amendment. 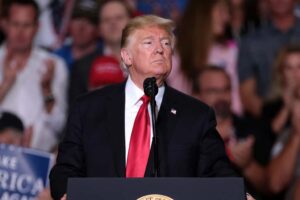 We need to remind President Trump to stay true to the 2A supporters who put him in the White House and not take ANY executive action to ban so-called “assault weapons.”

Already, in his address to the nation today, the President called on Congress to push so-called red flag laws. This will result in law-abiding Americans losing their guns — or even worse, being killed just like Gary Willis of Maryland was late last year.

In his tweets today, the President is calling for “strong[er] background checks,” which could be a veiled push for Universal Background Checks.

We need to flood the White House inboxes to be sure that YOU are the loudest voice heard by President Trump during the next few days.

Please add your name to our pre-written letter to President Trump reminding him to keep the promises he made to us on the campaign trail to defend our God-given rights.

Following the shooting in Virginia Beach, President Trump was considering banning silencers. But GOA sent countless letters to the White House signed by patriots like you, Erich, and we never heard him mention it again.

GOA has been in communication with offices on Capitol Hill and officials in the White House. Plus, we have been very active in the media, even authoring the response to USA Today’s calls for more gun control.

GOA is working hard to protect your rights. But our strength on Capitol Hill will only make a difference if you let your voice be heard.

Please add your name to our pre-written letter to President Trump reminding him to keep the promises he made to us on the campaign trail to defend our God-given rights.

VIDEO: What Politicians Should “Do” after the El Paso and Dayton Shootings