Obama No Longer Under the Radar

He’s at it again folks. That UN treaty is back– but with your help, we can defeat it again! 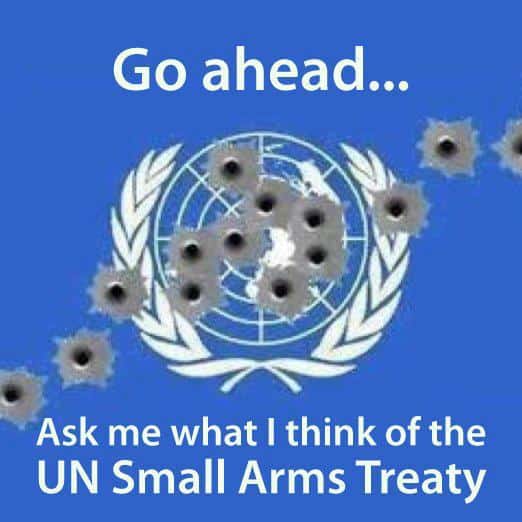 It took less than 24 hours.  The votes in Florida were still being counted.

But with Obama firmly entrenched for four more years, the U.S. officially went on record this week to support a new round of talks on the UN Arms Trade Treaty.

Whereas he once told Sarah Brady he was pushing gun control “under the radar,” now he can openly launch broadsides against our gun rights.

On Wednesday, the U.S. joined 156 other countries in voting to finalize the treaty in March, 2013.  Russia was the only major country to vote against.

Several media outlets have reported that the Obama Administration temporarily withdrew its support for the treaty this year, amid fears that such support could hurt him in the November elections.  According to Reuters, “Obama feared attacks from Republican rival Mitt Romney.”

Gun Owners of America worked with Senator Jerry Moran (R-KS) earlier this year to get 50 other Senators — some of them Democrats — to send a letter to the President opposing the treaty.

It was this letter, says Reuters, which prompted the Obama Administration to start “derailing the effort back in July.”

But now, with the President firmly ensconced in Washington for another term, the President is going to press hard for this gun control treaty.

So Gun Owners of America will be working hard with the new Senate to oppose the treaty.  And should the President sign it — and begin lawlessly implementing the treaty through Executive Orders — GOA will press the House and Senate to begin defunding his efforts.

We’ve done this before … we can do it again … together.

It’s going to be a long, hard battle.  And while we know this is going to be a tough economy, we really need you to stand with us and help us have the resources we need to fight these battles
.
Thank you for all your help.