Will You be a Part of the Solution?

“I applaud GOA for pushing constitutional carry in the states and concealed carry reciprocity around the country.” — Rep. Marlin Stutzman (R-IN), August 12, 2014

If you’ve been following the GOA Facebook page, you’re familiar with the story of Shaneen Allen.

She is a single mother of two who is being persecuted for exercising her Second Amendment rights.

Living in Philadelphia and working two jobs, Shaneen had already been the victim of previous robberies because she had to work late at night. So she bought a handgun, took a gun safety course and got a concealed carry permit.

Unfortunately, when she was stopped for a minor traffic violation in New Jersey, she thought she was doing the right thing when she announced to the officer that she had a concealed carry firearm in her car. 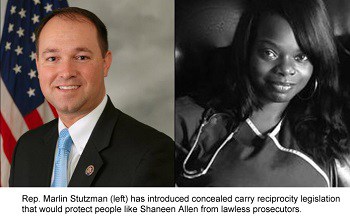 It was an innocent mistake. She only had the gun for about a week … was unaware that her permit didn’t apply to New Jersey, which is minutes away from Philadelphia … and she was trying to do the right thing by telling the officer she had a firearm.

But the prosecutors in New Jersey don’t care. And this is why we need concealed carry reciprocity — a bill that has been introduced by U.S. Representative Marlin Stutzman (R-IN).

How GOA members can make a difference!

GOA members will have an important legislative alert arriving in their mailboxes soon. Please read this important update, as it gives you important postcards addressed to:

* Senate Majority Leader Harry Reid, rebuking him for killing concealed carry reciprocity in the Senate this year; and,

* Your personal Representative, urging him to cosponsor H.R. 578, which is the concealed carry reciprocity bill introduced by Rep. Stutzman.1

If you are not receiving GOA’s legislative updates and newsletters via snail mail, then please CLICK HERE to activate your GOA membership.

There are other opportunities for helping helping Shaneen Allen.

For example, there is a Pro-2nd Amendment Rally in front of the Atlantic County Superior Court in New Jersey today to protest the judge and prosecutor in her case.

As always, we are very grateful that you remain an email activist. But it is also VITALLY IMPORTANT that we dump thousands of postcards on legislators’ desks. That’s a very visual demonstration that helps legislators feel the ire of gun owners nationwide.

If you are not getting the GOA postcards with GOA’s legislative “snail mail” updates, then click here and join GOA for just $20 — less than it costs to buy a box of ammunition.

(1) Stutzman’s bill (H.R. 578) would enact concealed carry reciprocity, while not imposing new regulations upon those states that have enacted constitutional carry laws. In doing so, H.R. 578 respects the federalist nature of our Constitution. There are other reciprocity bills in the House of Representatives, but Stutzman’s is the only one that protects the Second Amendment … protects constitutional carry … and does not impose any federal standards or schemes regarding state permits.

Self-Defense is a Religious Obligation