Will the Amnesty Bill Lead to Gun Confiscation in 2035?

[blockquote]”Immigration reform could be a bonanza for Democrats [and] cripple Republican prospects in many states they now win easily.” — Politico, April 22, 2013[/blockquote]

In 1984, California was sufficiently conservative so that it cast its electoral votes for President Ronald Reagan. It was not fiercely pro-gun, but, then again, it wasn’t New York.

But that was enough to change California from a sometimes “swing state” to a state almost wholly controlled by Leftists. Within 20 years — and continuing to this day — California couldn’t pass enough gun bans, gun registration, ammunition limits, and ammunition registration. 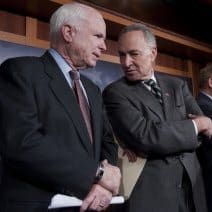 We predict that, if the bill is passed, by 2035, the American electorate will have changed so fundamentally that California-style gun control could become a very real possibility in this country!

We know you’re tired. We have just fought a hard-fought battle over explicit gun control in the Senate — a battle which we won.

But it does strike us as interesting that the same gun control crazies who pushed gun control want to slam immigration amnesty through the Senate quickly so they can redirect their fire against us again.

Who are the chief architects of forging a more anti-gun electorate? Well, the chief sponsor of S. 744 is Chuck Schumer, and he is joined by other Second Amendment haters such as Dick Durbin (D-IL), Bob Menendez (D-NJ) and compromiser John McCain (R-AZ).

Over the next week or so, we’ll let you in on some of the anti-gun specifics of Schumer’s “amnesty bill,” as it’s correctly dubbed. But for starters, the bill would push us towards a biometric ID card, which is something that GOA has opposed for years — given that a de facto National ID poses a huge threat to gun owners’ privacy.

But then there’s the fact that Schumer’s “amnesty bill” requires the government to give its okay — in a Brady Gun Check-type procedure — before you could get a private job in America (section 3(c)(2)(A)(iii)). Does anyone not see why this might be a problem?

We’ve just gone through excruciating pain to stop the expansion of Brady Checks for guns. Now we turn around and the same parties who were pushing that are now pushing Brady Checks for private jobs.

It’s ironic that those pushing for background checks are adamantly against ID’s for voting because that would disenfranchise the elderly, the poor, and minorities. Hmm, so they do understand that background checks — as a prior restraint — are a fundamentally flawed concept?

But this is where the real fun starts. You feed the potential employee’s info into a government database and, according to Senator Durbin, “up pops a picture.” And, says Durbin, “if that picture doesn’t match [the one on your ID], you may not be employed.”

The Brady Check deals with a list of names which is in the millions. It deals only with things like names and social security numbers, not pictures. Yet it gives “false negatives” 8% of the time. And if you’re one of those 8% who are illegally denied a gun, the FBI’s response, more often than not, is “So sue us.” If this weren’t bad enough, the system breaks down for days at a time — normally the times when the most people need it.

Do we really want to expand this flawed concept to other areas of our lives?

If this weren’t bad enough, we know that, once the government has to give its approval before you can do something, it’s an almost iron-clad guarantee that it will exercise that power in a political manner. Under the Brady Check system, 165,000 law-abiding honorable veterans have lost their gun rights, not because they have done anything wrong, but because they sought counseling from the VA on the basis of a traumatic experience in the military.

Watching Schumer explain on the Senate floor why those veterans should lose their constitutional rights without any court order — while he vigilantly defends due process for foreign terrorists — is like watching a dung beetle drag its “prey” back to its lair.

Now, one would think that the fact that one million people in Boston were put under house arrest last week because our current immigration system allowed two asylum-seekers from terrorist-filled Chechnya to become legal residents and, in one case, a citizen of our country, will put the skids on the “inevitability” of Schumer’s amnesty bill. After all, gun control was “inevitable” too.

But the bottom line is this: Just as we saw the gun ramifications of ObamaCare, we will also see the problems with a bill that alters the electorate in such a way that the Second Amendment will cease to exist. In doing so, we will need to make sure that we don’t have most of our guns registered or confiscated in 2035 because short-sighted politicians listened to MSNBC and turned our country blue.

But we will also make sure that we do not take bad gun law and turn it into bad employment law.

ACTION: Contact your Senators and ask them to oppose the anti-gun Schumer amnesty bill (S. 744).

[readon2 url=”http://www.capwiz.com/gunowners/issues/alert/?alertid=62625421″]Click here to send your Senators a prewritten email.[/readon2]