Gun Control can be Passed Only if Republicans Sell Out

[blockquote]“Gun-control measures that seemed destined to become law after the school shootings in Newtown, Conn., are in jeopardy amid a fierce lobbying campaign by firearms advocates.” – The Washington Post, April 1, 2013[/blockquote]

Your activism is making a difference, but we need to keep the pressure on!

As so, as we approach “gun control Armageddon” next week, we are faced, not surprisingly, with “sell-outs and rumors of sell-outs.” 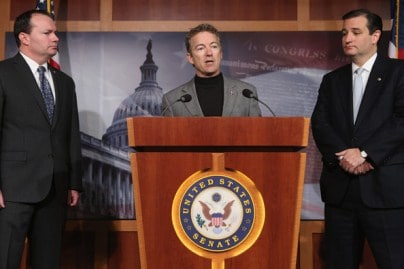 But we can conclude that all gun control will die UNLESS Republicans flinch. And this is why, now that anti-gun Senator Chuck Schumer is on the verge of a humiliating defeat, he’s scrambling for some feckless Republican who will help him turn GOP victory into GOP defeat.

Anti-gun columnist Ruth Marcus spoke for Schumer last Wednesday morning when she suggested that, as a desperation measure, anti-gunners might have to drop recordkeeping from the universal registry bill.

But even if ALL recordkeeping were dropped, which is doubtful, background checks would mean that:

The solution to all of this is easy, and it’s for Senators to support the Paul-Cruz-Lee filibuster! Tell them not to let Congress sidle up to the gun control buffet and to defeat the motion to proceed to gun control.

ACTION: Contact your Senators. Demand they support the Paul-Cruz-Lee filibuster and oppose the motion to proceed to any gun control vehicle.

[readon2 url=”http://capwiz.com/gunowners/issues/alert/?alertid=62562581″]Click here to send your Senators a prewritten email.[/readon2]

The system will automatically select a pre-written editable response, depending upon whether your Senator is a Republican or Democrat.