Note to Dianne Feinstein: Yeah, You Do Need to be Lectured on the Constitution

In case you missed it, an interesting exchange took place in the Senate Judiciary Committee last week.

Texas Senator Ted Cruz politely asked gun-control crazy Dianne Feinstein how she would feel about applying her minimalist view on the Second Amendment to other parts of the Bill of Rights. 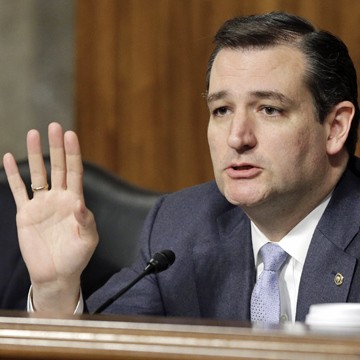 Feinstein went into orbit. “I’m not a sixth grader,” she huffed. Invoking her extensive Senate history of spitting on the Constitution, she made it clear that she didn’t appreciate being reminded of the Constitution’s restrictions on her legislative will.

Feinstein suggested that Congress should pass anti-gun legislation without considering the Constitution, in the expectation that the courts will sort it out. Notwithstanding the fact that Feinstein and every other senator had taken an oath to support and defend the Constitution.

So here’s where we are: In a few weeks, after Easter recess, Harry Reid will move to proceed to some gun control proposal, probably the Veterans Gun Ban (S. 54). He’ll then use his privileged recognition to set up a whole lot of votes intended to get Democrats reelected in 20

making them vote against measures which biased polling shows are popular in their states. Republican senators need to join together as a caucus to oppose the “motion to proceed” to any gun control legislation.

Let the Democrats be the ones forced to bite the bullet and vote for a “motion to proceed” which is framed as a vote in support of the Feinstein gun ban.

Under regular order, 41 Republicans can block any gun control this way. Harry Reid can use a special procedure under the anti-gun rules changes to force a vote with 51 Democrats, but, if he does, Mitch McConnell gets to “stop the trains” by offering the first unamendable amendment — a process which Reid cannot relish.