Send your own petition to Speaker Boehner, urging him to move Rep. Gosar’s resolution.

It’s becoming obvious that the corrupt, virulently anti-gun Attorney General Eric Holder thinks he can stonewall Congress in connection with his cover-up of the Fast & Furious Operation. 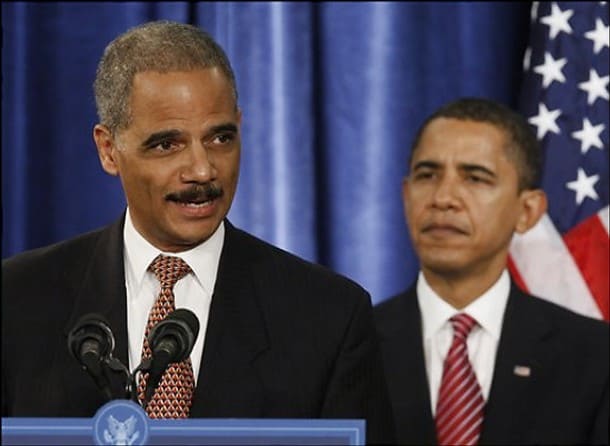 Yet, Holder continues to lie under oath and to stonewall Congress.

He has sent only 6,400 pages of the 83,000 documents demanded by a congressional committee — and many of these are nothing but blackened sheets of paper. Furthermore, he has absolutely refused to provide documents which would tell Congress “what Holder knew and when did he know it” — claiming that these are “deliberative” in nature.

He has lied under oath, testifying that he didn’t know of Fast and Furious, even though at least seven relevant memoranda had been sent to him, dating as far back as July, 2010.

And, perhaps worst of all, the House appears to be putting on the kid gloves and taking the pressure off this perjurer who continues to harass gun owners as the nation’s chief law enforcement officer.

So the time to act is now. We need to encourage House Speaker Boehner to move the Gosar resolution expressing “no confidence” in the corrupt Attorney General.

Yeah. We know. We know. It would be far better to just impeach Holder.

But we believe that House action condemning Holder would be so rare — would garner so much press attention — and would receive such broad support in the House — that it would place enormous pressure on Barack Obama, in an election year, to simply push Holder out the door.

Click here to go to the Speaker’s web contact form, then cut and paste the petition, found below.

This is a pivotal moment in history. If Barack Obama and Eric Holder are given a “pass” on their insidious role in the murderous Fast & Furious program, many Americans who care about the Second Amendment will go into the upcoming elections with no understanding of the moral corruption of this administration — and the consequences of that corruption, in terms of human life.

Whereas the Justice Department’s Operation Fast and Furious resulted in over 2,000 firearms being shipped across the Mexican border to Mexican drug cartels;

Whereas the Justice Department knew that it had neither the logistical nor the legal ability to track the Fast and Furious firearms which it was deliberately allowing to be transported to Mexican drug cartels;

Whereas, Attorney General Eric Holder testified before the House on May 3, 2011, that he had only known of Operation Fast and Furious for a “few weeks”;

Whereas CBS Evening News reported on October 3, 2011, that Attorney General Holder had received no fewer than seven memoranda on the Fast and Furious program, dating back to July, 2010;

Whereas it is not a legal defense that a principal such as Attorney General Holder deliberately ignored the written advice of his attorneys and his subordinates in a case where his ignorance resulted in over 300 murders;

Whereas Attorney General Holder has politicized the Justice Department and has brought disgrace to himself and the department he heads;

Whereas the only acceptable outcome is for Attorney General Holder to be removed from his position of trust, in anticipation of a full investigation of his criminal culpability;

Be it therefore resolved, that

As a member of Gun Owners of America, I call upon House Speaker John Boehner to schedule immediate House floor consideration of Congressman Gosar’s resolution expressing “no confidence” in Attorney General Eric Holder.