Scandal along the U.S. – Mexico border continues to plague the federal Bureau of Alcohol, Tobacco, Firearms and Explosives (ATF), and is raising eyebrows on Capitol Hill.

Scandal along the U.S. – Mexico border continues to plague the federal Bureau of Alcohol, Tobacco, Firearms and Explosives (ATF), and is raising eyebrows on Capitol Hill.

When Border Patrol agent Brian Terry was shot and mortally wounded in a gun battle about 10 miles from the Mexico border in Arizona in December, 2010, it appeared to be yet another example of Mexico drug gang violence spilling over the border. But as more and more information from the crime scene leaked out, disturbing evidence also pointed to serious wrongdoing at the ATF.

Since 2005, the ATF has been involved in an initiative called “Project Gunrunner.”

Under this plan, ATF was to trace the flow of guns supposedly trafficked by straw purchasers in the U.S. to across the border into Mexico. When concerned firearms dealers, fearing the guns were being sent into Mexico, contacted ATF, they were instructed to proceed with the questionable and illegal sales to suspected straw buyers.

The mismanagement and botched oversight of “Gunrunner” has led to what has become known as the “Gunwalker” scandal.

According to current and former agents, perhaps as many as 3,000 firearms were allowed by ATF to “walk” across the border into Mexico. But the firearms—along with any hope of tracking them to higher level criminals—disappeared once the guns crossed the border. The ATF literally lost track of the weapons.

Two of these guns, however, turned up at the scene of Brian Terry’s murder. They were traced to an American gun store that had been cooperating with the Phoenix ATF office as part of Project Gunrunner.

The information about Agent Terry’s murder and the potential role played by Gunrunner came to the attention of Iowa Senator Charles Grassley, who sent a letter of inquiry to Acting ATF Director Ken Melson. In the letter, Sen. Grassley wrote that the Judiciary Committee, of which he is the ranking member, “received numerous allegations” that the ATF authorized the sale of hundreds of firearms to suspected illegal buyers, “who then allegedly transported these weapons throughout the southwestern border area and into Mexico….Two of the weapons were then allegedly used in a firefight…killing CPB Agent Brian Terry.”

Senator Grassley went on to quote from a scathing Department of Justice review of Project Gunrunner, which found that ATF focused on low level, individual straw buyers “instead of targeting higher-level traffickers and smugglers.”

Sen. Grassley clearly ruffled some feathers in the agency. When an agent in the ATF’s Phoenix office spoke to someone on Grassley’s staff, that agent was accused by a superior of “misconduct related to his contacts with the Senate Judiciary Committee.” The Senator had to remind the agency of federal whistleblower protections and that agents “have the rights to be free from fear of retaliation or reprisal” for speaking with members of Congress. “Rather than focusing on retaliating against whistleblowers, the ATF’s sole focus should be on finding and disclosing the truth as soon as possible.”

Beginning of the End for ATF?

American taxpayers spend millions upon millions of dollars on the ATF’s border efforts, but the agency may be making the situation more dangerous and more violent.

GOA has posted an in depth analysis and history of the Gunwalker scandal, along with tons of supporting documents

We’ve also initiated a petition urging Congress to take a fresh look at the agency in light of the latest outrage, and to take Firearms out of the ATF’s jurisdiction. 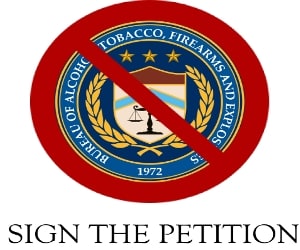 The Gunwalker scandal, unfortunately, is just the latest in a long string of abuses by the agency. From Ruby Ridge to Waco, from harassing law-abiding citizens at gun shows to helping to drive 80 percent of gun dealers out of business, right up to the latest scandal, ATF has been involved in some of the greatest government-perpetrated atrocities in modern times.

Congress has held many hearings looking into this rogue agency; it has tried to cut its budget and otherwise rein in the ATF. In fact, as far back as 1982, a Senate subcommittee noted that ATF “has trampled upon the second amendment by chilling exercise of the right to keep and bear arms by law-abiding citizens.”

But so far, congressional concern over the agency has not resulted in any substantive action. To the contrary, over the years the agency has continued to grow in its budget, personnel, and mission.

Americans have an individual, fundamental right to keep and bear arms, protected in the Second Amendment, yet this government agency is dedicated to regulating that right. It is becoming increasingly obvious that both cannot coexist.

GOA’s petition asks Congress to exercise its constitutional authority get the ATF out of the firearms regulating business. This is an agency that should not exist, and one that is repugnant to the ideas of liberty the Founding Fathers sought to implement.

Of course, it won’t be easy. But if enough Americans make their voices heard we can do away with this unconstitutional agency. So please, click here to sign the petition today, and then help spread the word.

Letter to BATFE from Sen. Burr