Huge Issue Looming Under the Surface of Presidential Politics 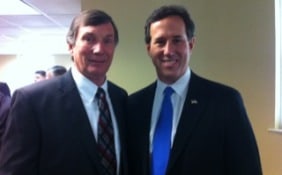 Pictured: GOA Vice Chairman Tim Macy with Sen. Rick Santorum.    Ron Paul, Newt Gingrich and Santorum have all pledged opposition to a UN gun control treaty — but not Mitt Romney. What is he hiding?

While most people would rate the economy and jobs as the most important issues in the 2012 Presidential campaign, another issue of overwhelming importance would be the United Nations Arms Trade Treaty. 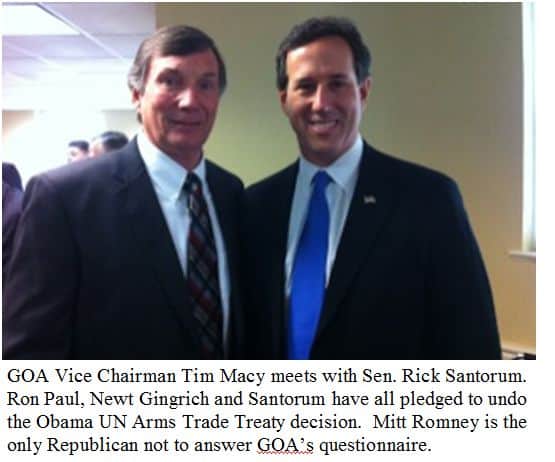 Many Americans have never heard of this treaty.  But President Obama and Hillary Clinton reversed the position of President Bush and are pushing a UN treaty that could ban large classes of firearms (such as semi-automatic firearms) and license everything else.

In secretive, behind-closed-door meetings, the UN committee charged with drafting the Arms Trade Treaty language has covered lots of ground. From deciding how to force the to reduce its military strength, to deciding if every American should give up our guns, these folks have every intention of weakening our ability to protect our nation.

If this treaty were to be ratified by the United States Senate, every American citizen’s Second Amendment rights would be threatened by the United Nations. If that doesn’t scare every freedom-loving American, nothing will!

This is one of the biggest reasons why Gun Owners of America believes the most important elections in 2012 after the Presidential race are in the United States Senate, where we must take the gavel away from left-wing dictator Senator Harry Reid.

There is only one Republican candidate running for President who has not committed to reversing the Obama/Clinton position on the Arms Trade Treaty — Mitt Romney.

While every other candidate still in the running for the Republican Presidential nomination has said they would oppose this treaty, Mitt Romney has refused to state his position, refusing to answer the Gun Owners of America questionnaire on this and many other gun-related issues.

Many in the media have tried to coronate Mitt Romney as the eventual nominee, but we think the nomination is still up for grabs.  This is why we want to get every Republican on record.

There is too much at stake to allow Mitt Romney a “pass” on this issue. With the field getting smaller–we need an answer from Romney.

Gun Owners of America is asking every person who reads this alert to contact the Romney campaign and ask why he is ducking our Questionnaire, especially on the question of the UN Arms Trade Treaty.

You can email the Romney headquarters at [email protected], or call 857-288-3500.  Let him know what you think and tell him you would like an answer.

Time is running out. It’s time to get EVERY candidate to answer the tough questions. Stop dodging, Mitt . . . start answering.

PS  Of the four Republican candidates remaining in the race, only Mitt Romney has refused to take a stand on important issues such as opposing a UN gun control treaty.  Please contact the Romney campaign at [email protected], or call 857-288-3500 and urge him to return the Gun Owners of America Presidential Questionnaire.