Guns for Her, but Not for You

Nancy Pelosi wants guns for her, but not for you. 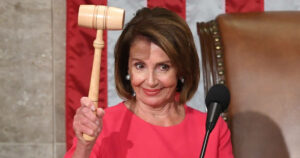 On Feb. 14, the speaker of the House of Representatives helped launch a flotilla of gun control measures, claiming, “We will not rest until all Americans, in schools, in the workplace, in places of worship, and throughout our communities are safe.”

That’s strange, because last year, she knelt in Kente cloth in support of the hundreds of rioters running rampant throughout the country.

That is, until the Capitol riot—after which she made certain to get as many guns as she could to the U.S. Capitol, as long as they were protecting her.

At that point, U.S. Sen. Tom Cotton (R-Ark.) charged that Pelosi turned the Capitol complex into a “‘Green Zone’ protected by no-scale fencing, razor wire, and 26,000 soldiers.” It was primarily at her request that the National Guard deployed five times more troops to Washington than serve in Iraq and Afghanistan combined.

The reason, Cotton believes, is that Pelosi was “egged on by excitable cable news pundits and Democratic partisans eager to portray President Donald Trump’s 74 million voters as ‘domestic terrorists.’”

According to Cotton, a member of the Senate Intelligence Committee, there existed “no specific, credible threat reporting—as distinguished from aspirational, uncoordinated bluster on the internet—that justifies this continued troop presence.”

In fact, a member of the U.S. House Armed Services Committee asked Pelosi for a briefing as to “why do we need these troops here, and we have received zero information, zero.”

U.S. Army officials have confirmed that at least 5,000 troops will remain in Washington until mid-March.

Eight-foot fences with concertina wire still surround the Capitol, although Pelosi claims such measures aimed to protect the country’s border were “ineffective” and “immoral.”

Regardless, with the Capitol converted to an armed bunker, Pelosi appeared at a press conference announcing The Gun Trafficking and Crime Prevention Act, The Gun Show Loophole Closing Act, The NICS Review Act, The Firearm Risk Protection Act, and The Handgun Trigger Safety Act.

Those bills include a prohibition on anyone in the country buying or selling a single gun without “appropriate” insurance—unless, of course, the purchase or sale of the firearm is by certain government entities, which just happen to include the National Guard guarding Pelosi.

The measures also include a blanket ban after five years on the manufacture of all handguns, or after 10 years on their sale, unless they include a virtually nonexistent technology that “personalizes” the weapon—unless, of course, the purchase is by a government entity, which just happens to include the National Guard guarding Pelosi.

So, when rioters are running rampant through your neighborhood, Pelosi is for it.

When you want to buy a gun to defend yourself, Pelosi is against it.

But when she needs men and women with guns to defend her—Pelosi is for it again.

Instead, how about this radical idea: Why don’t we respect all Americans’ rights to defend themselves, and arrest all those who riot?

In short: Guns for her, and for you.