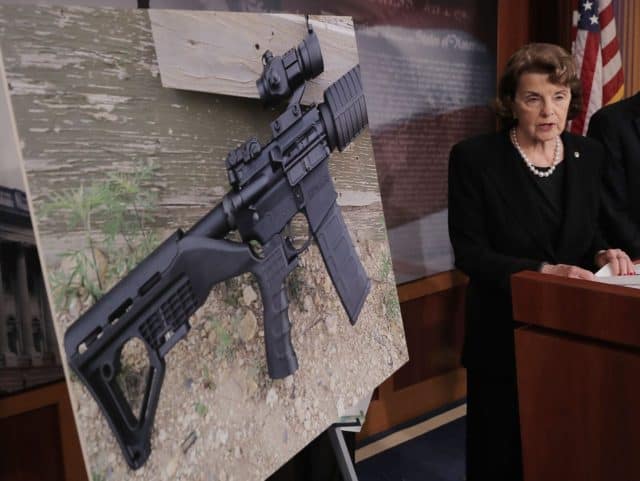 A ban on bump stocks will also prohibit other gun parts and magazines. Senator Dianne Feinstein’s bill (S. 1916) to ban bump stocks would ban any part or device in a firearm that “functions to accelerate the rate of fire of a semi-automatic rifle.”

“You never want a serious crisis go to waste,” said Barack Obama’s former Chief of Staff, Rahm Emmanuel. And that has become the clarion call for the anti-gun Left, which is now trying to coerce gun rights supporters into accepting a ban on bump stocks in the wake of the horrific Las Vegas shooting.

But here are ten reasons why such a ban is dangerous and should be fiercely opposed by gun owners:

1. The Second Amendment says the right of the people to keep and bear arms “shall not be infringed.” Our rights are not privileges from the government that can be revoked at will. Rather, they are “unalienable”—or irrevocable—and come from the Creator, as stated in our Declaration of Independence. To support an infringement here will weaken our ability to oppose the next infringement that comes down the pike.

2. Speaking of greater infringements, House Minority Leader Nancy Pelosi (D-CA) has already stated that “I certainly hope” a ban on bump stocks will lead to further gun restrictions. She actually has a point. Saying “yes” to one infringement will eventually lead to more.

3. A ban on bump stocks will also prohibit other gun parts and magazines. Senator Dianne Feinstein’s bill (S. 1916) to ban bump stocks would ban any part or device in a firearm that “functions to accelerate the rate of fire of a semi-automatic rifle.” This language could affect competitive shooters who outfit their rifles with lighter trigger pulls, accelerated hammer drops and polished bolts. Can anyone doubt that these modifications help shooters “accelerate the rate of fire”? In GOA’s opinion, Feinstein’s bill also puts magazines at risk from anti-gun presidents, liberal judges, and progressive bureaucrats. After all, they could simply make the ridiculous argument that rather than putting one round into a rifle at a time, a magazine helps “accelerate the rate of fire” of a semi-auto. No doubt, Feinstein would prefer that we be limited to single-action, cowboy-style revolvers.

4. The overwhelming majority of law enforcement officers disagree with efforts to limit a person’s rate of fire, arguing that it would not make America safer. According to a 2013 survey, 95% of cops said they do NOT think that a federal ban on large capacity magazines would reduce violent crime.

5.A ban on any firearm part only serves to demonize firearms, when the real culprit is the Las Vegas loser who murdered 58 people. Focusing on a product misses the point entirely. Hammers, like the one this creep used to break out the windows of his hotel room, kill far more people every year than do rifles of all kinds (including AR-15s).

6. If we go down the road of asking who needs a bump stock or an AR-15, then where will it end? Because who really needs a box truck, like the one used to murder 86 people in France? And does anyone truly need to fertilize their lawn when such a product can be used by a Timothy McVeigh to blow up a building and kill more than 160 people? And who actually needs a box cutter, like the ones that helped murder more than 3,000 people on 9-11?

7. Regulating or banning bump stocks will not stop the next mass shooter. There are plenty of YouTube videos showing how one can use rubber bands or belt loops to help increase the rate of fire with a semi-automatic firearm. Will blue jeans be next on the chopping block?

8. Draconian gun restrictions have also proved totally ineffective in other countries, like France. In just one year, 2015, more people were murdered in mass shootings in France than in all the U.S. mass shootings during the eight years of Obama’s presidency.

9. Why would anyone in the gun rights community support a gun control proposal when we have been waiting for several years to get concealed carry reciprocity? Congress should pass H.R. 38 right now, as this bill would enable good people to stop most mass shooters—similar to the firefighter in South Carolina or the concealed carry holder in Arlington, Texas.

10. The push to ban bump stocks is nothing more than an attempt by the anti-gun Left to put points on the board. They have been unable to get any traction during a Republican administration. Gun owners would be foolish to help them get an easy win.

Erich Pratt is the executive director Gun Owners of America and a guest columnist for “Down Range with AWR Hawkins.”